WHO'S WHO IN IOA

Dr. William H. Avery is author of the authoritative book on ocean thermal energy: "Renewable Energy from the Ocean: A Guide to OTEC", with co-author Professor C. Wu of the U. S. Naval  Academy, Oxford University Press, New York. 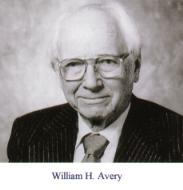 William H. Avery was born in Fort Collins, Colorado, USA in 1912.  He attended Pomona college in California (B.A. 1933) and Harvard University where he received the Ph.D. in physical chemistry (photochemistry) in 1937. During 1937-38 he was a post-doctoral research fellow at Harvard.  He then joined the Shell Oil company in their Houston Research Laboratory.  After 3 years of combustion research at Shell, he was asked in 1941 by the National Defense Research Committee to join a group with the mission to develop solid fuel rockets for the war effort.  This work led to the development of propellant compositions with combustion characteristics that were suitable for scaling propellant charges to large sizes, and made possible the later development of large solid rockets for Polaris and the ICBM.  This work was recognized by his receipt of the Naval Ordnance Development Award, the Presidential Certificate of Merit and the Hickman Medal of the American Rocket Society (combined in 1963 with the Institute of Aeronautical Sciences to form the American Institute for Aeronautics and Astronautics). At the end of World War II he worked briefly for Arthur D. Little Co. in Cambridge, Mass, and then in 1947 came to the Johns Hopkins University Applied Physics Laboratory (APL) where he has been ever since.  At APL he initially led the group who developed the booster rocket For the Talos ramjet missile and became responsible for R & D on both rockets and ramjets. for his leadership of  the group engaged in combustion research he was awarded the Sir Alfred Egerton Gold Medal of the International Combustion Institute. In 1973 he became Assistant Director of APL for Research and Development.  At that time the problems of urban congestion and pollution had become of National interest.   Under Avery's direction APL became a major contributor to R & D on automated modes of transportation, which offered promise of getting cars off the city streets.   This work resulted in an IR100 award in 1972 for the invention and demonstration of an accelerating walkway.  (The award is given annually to one hundred inventions that are judged to be the most significant of the year).

At the onset of the oil crisis in 1973, Avery, with Dr. Stone of APL, organized a series of evening seminars at APL to search for the best options for the U.S. to follow in finding energy sources that could replace the energy derived from imported oil. The sessions continued over a period of six months and involved an estimated 75 man-weeks of literature review and analysis by APL senior staff volunteers. The review included evaluation of the potential benefits and tradeoffs of the energy-supply options: nuclear, coal, enhanced oil exploration in the U.S., shale oil, natural gas, biomass, winds, waves, direct use of solar energy, and ocean energy sources; waves, currents, tides and ocean thermal energy conversion (OTEC).  It was concluded that OTEC, employing floating plantships that would synthesize ammonia, would be superior to the other options for timely relief to dependence on foreign oil, and deserved strong public support. Accordingly, APL proposed programs for federal support that, over a 5 year period, resulted in baseline preliminary-engineering designs of floating, moored and grazing, 40-MWe OTEC barge mounted plants that would be the first stage of a national program that could free the U.S. from the need for imported oil.

In APL studies of OTEC commercialization, attention was initially focused on production of ammonia on floating 350-MWe OTEC plantships that would be sited on the tripical oceans anywhere that the surface to depth temperature difference exceeded 22ºC.  For the first phases of OTEC commercialization, OTEC ammonia would replace ammonia produced by steam-reforming of natural gas, freeing the natural gas to replace petroleum used for industrial heat.  As production increased liquid ammonia would become a preferred fuel to replace gasoline.  Liquid ammonia is a non-polluting fuel with 110 octane number that has physical properties closely similar to those of liquid propane.  It would be an attractive automobile fuel but would require moderate modification of fuel controls and storage for commercial use, to become a replacement for gasoline.

It was soon realized that the OTEC plantships could also produce methanol, which can be an immediate replacement for gasoline and could be an early cost-effective replacement for imported oil.  Small numbers of methanol powered cars have already been produced by the automobile industry indicating that production costs and operatings costs per mile would be closely similar to those of gasoline powered cars. Automobiles powered with methanol fuel would generate slightly less CO2 per automobile mile than gasoline.  Eventually, however, the threat of global warming will require replacement of gasoline by a non-polluting fuel.  Ammonia will be preferable to hydrogen, the only non-polluting alternative, because of its advantages in cost, stoargage, handling and distribution.

The OTEC program was supported at APL until 1984 when all funding was terminated by the Reagan administration.  Avery continued his interest in OTEC, presenting papers at national and international conferences on renewable energy, emphasizing the OTEC potential to make significant contributions to world fuel supplies.  He officially retired from APL in 1989 but was granted permission to retain his office at APL, as a consultant.   At that time the propulsion research laboratory at APL was renamed the Avery Propulsion Research Laboratory, in his honor.

Concerned that the information collected during the period of major funding of OTEC was being lost, Avery began devoting full time to writing the OTEC book. The effort resulted in the review and collection of a data base of over 2500 documents.   A selection of material for incorporation in the book was then made that describes OTEC technology in sufficient depth to allow later investigators to proceed with OTEC construction, without reinventing the technology, when the need is recognized for large amounts of non-polluting fuel that OTEC could supply, and funding eventually becomes available.  In the meantime, Avery is working to demonstrate the performance features of ammonia as an automobile fuel and to acquaint the world audience with the role that OTEC can fulfill in assuring a sustainable future for planet earth.