Under certain condition, natural forces cause deep ocean water to rise to the surface.   This natural upwelling occurs over about 0.1% of the ocean but that 0.1% produces about 44% of the world's fish catch.  Nutrients concentrated in the cold deep water are brought to the surface, utilmately enhancing the fish population.  Artificial upwelling is a desirable way to increase the population of edible fish, thereby increasing the world's protein supply.  While the use of the cold water effluent form an OTEC plant is a possibility, the cost of such a system will be high.  However, a viable system would consist of a large array of individual pumps arranged over an area of the ocean.  The success of this idea depends on an economical way to upwell the water over a large area of the ocean.

Without any study of the literature, an idea came to mind that would be easy to try out: a float, supporting a long pipe with a hinged valve on the top, that would move up and down with the waves.  During the upward motion, the valve would be closed and the column of water in the pipe would be accelerated upward by suction.  When the system begins the downward cycle, water will flow out of the top of the pipe until the valve closes again during the next upward cycle.

Wick and Castel*, in work funded by the State of Hawaii Department of Planning and Economic Development and the Hawaii Natural Energy Institute, tested an Isaacs pump model.   The basic idea for the Isaacs pump and the pump proposed in this article is identical.  However, the Issacs pump's main purpose was to generate electricity; the proposed pump will be used to upwell deep ocean water.

Mathematical calculations using theoretical trochoidal waves indicate that when the valve is closed during the upward motion of the wave, the water column in the pipe is being accelerated by the vacuum under the valve.  The useable "work" being done to increase the upward velocity of the water in the pipe results in kinetic energy which keeps the water flowing out of the pipe when the valve is open.  Caculations indicate that, with an eight foot wave, the flow of water will exceed 6,000 gallons per minute with a 3-foot diameter pipe that is 700 feet long and has appropriate float.

The first attempt at a working design for a float and pipe arrangement is shown in Figure 1.  The basic structure would be made of fiber glass.  A gimbal is shown to allow relative motion between the float and the pipe.  An alternate solution would be a section of flexible pipe.

The weighted valve opens when the relative motion of the water in the pipe is up relative to the pipe, and closes when it is down relative to the pipe.  Water is spilled onto the deck and runs out by gravity through the many small holes in the flexible hoses, much like a drip irrigation system.  This allows the deep ocean water to mix with the surface water to prevent sinking of the cold nutrient rich water.

It is not necessary to pump the deep water to the surface, only to the trophic zone where sunlight and the nutrients will result in plant growth and hence food for fish populations.  Thus the system can survive severe storms by anchoring the pump below the surface of the ocean.  While the storm will destory the plant food supply, this will only be temporary and the end of the storm will see a rebuilding of the nutrient and food supply.

Using an old truck tire on a rim and a length of 4" diameter sewer pipe, a very simple working model was made.  Testing in Kaneohe Bay, Hawaii, in 1991 showed the idea works and water can be upwelled using this method!

Note:  The author has performed preliminary calculations involving amounts of water pumps from various sizes of pipes at several different velocities.  Any inquiries can be addressed to the author at 45-437 Akimala Street, Kaneohe, Hawaii 96744, USA. 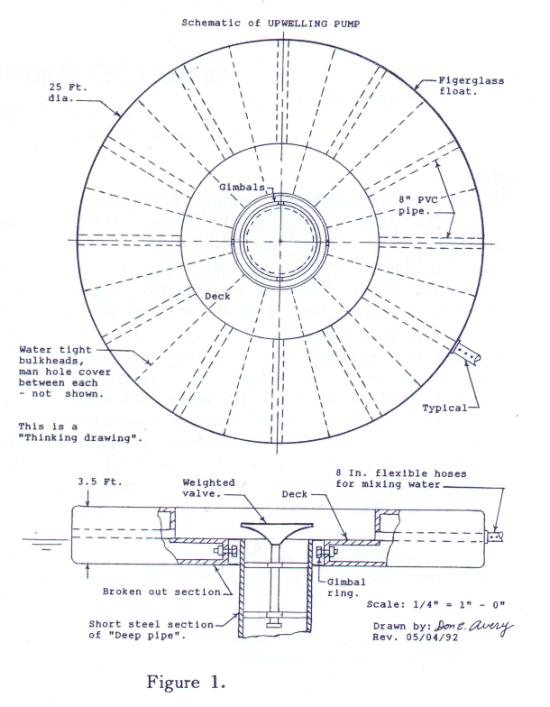