After Multiple Product OTEC Project (MPOP) was proposed in Taiwan, a number of people have concerned the problems regarding to the uncertainty and difficulties associated with the design and arrangement of cold water pipes (CWP). 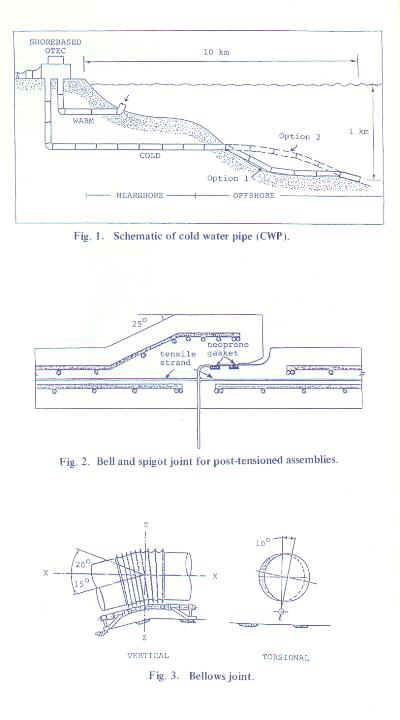 To answer some of those concerns, Dr. Hsiang Wang, chairman and professor of the Coastal and Oceanographic Engineering Department, University of Florida, recently proposed a slope-mounted cold water pipe which is cost-effective and is adequate for the shorebased OTEC plant currently planned for eastern Taiwan.

Based on the assumed data given in the MPOP development plan, Dr. Wang presented the schematic of his shore-based concept in Fig1. He said the candidate materials for the pipeline are steel, concrete, fiber-reinforced plastic (FRP), sandwish wall construction with FRP layers separated by high density foam, and high density po1yeth1ene (HDPE). The pipe will traverse the shelf and the escarpment, if any, before reaching the deep offshore region. He exp1ained that two options were indicated in the schematic. Option 1 use either 1ongitudinally post-tensioned concrete segment assemblies, connected together by bell and spigot joints, Fig2, which are more flexible than standard concrete pipe. Also, they can be pulled out in water rather than painstakingly laid segment by segment, as in the case for the standard concrete pipe, or HDPE pipe segments joined together by thermal fusion. In option 2, the pipe is 'freed' from seabed conditions by an inverted catenary arrangement with HDPE or fiber-reinforced plastic segments. But, this concept may be subjected to severe vortex-excited oscillations. The preferred concept is Option 1, with HDPE (pipe lengths of 12m). Its ability to be joined by thermal fusion, resistance to corrosion, abrasion, deformation, and material biofouling make it ideal for underwater pipelines. Particular mention must be made of the light weigh that allows for easy lifting and towing in long lengths, and the flexibility that allows bending to a radius of 25 times the pipe diameter, which minimizes the need for expensive ball joints. The piping will conform, to some extent, to undulating trench bottoms or profiles. For very large s1poe changes, bellows-type joints, formed by bolting together doughnut-shaped rubber membranes with stiffener rings, Fig3, can be used.

In view of its lightness (specific gravity-0.95) and ease of fusion jointing, HDPE piping can be assembled and installed without expensive specialized equipment, and with a minimum of construction personnel. Since its development in the 1950's. considerable progress quality of HDPE. 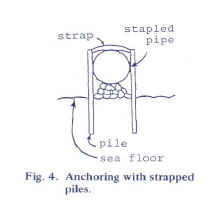 The wide range of field applications include a number of large diameter outfalls, four in Australia, resulting in cost savings of &1.5 million in one case.

In the proposed concept, the pipeline is supported on the seabed with gravel-filled bags (less rigid than concrete supports) and anchored down by strapped piles, Fig. 4. Dr. Wang also mentioned the design criteria which include: