THE STATUS OF THE NPPE PROJECT

The Net Power Producing Experiment (NPPE) has been developed to experimentally verify the feasibility of Open-Cycle Ocean Thermal Energy Conversion (OC-OTEC) by producing a minimum of 40 kw of net power at reduced technical risk.  The NPPE is a landbased, small experiemental facility that will be installed and operated for 24 months at the Seacoast Test Facility (STF) in the Natural Energy Laboratory of Hawaii (NELH), Kailua-Kona, Hawaii. 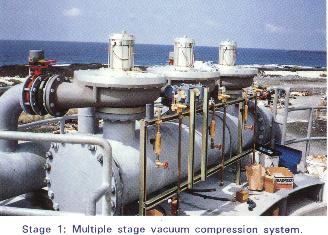 The NPPE system is built around a vertical-axis, mixed-flow turbine supported by a concrete vacuum vessel, 7.6 m diameter and 9.5 m high.  An air-cooled salient-pole, synchronous electrical generator is located outside the vacuum vessel, above the turbine assembly. Steam is produced in an annular flash evaporator at the periphery of the vacuum vessel.  The steam flows up from the evaporator, through a mist eliminator located at the turbine inlet flange, and enters the turbine radially inward.  The steam exits the turbine axially in the center of the vessel.  A conical exhaust diffuser, which is used for pressure recovery, forms an annular entry to the condenser.  The condenser is a  direct-contact, structured packing condenser composed of two coaxial stages.  A distribution manifold provides cold seawater to both condenser stages through a drip tray for the countercurrent stage and a series of radial pipes for the cocurrent stage.  The noncondensible gases liberated from the seawater streams, at pressures of 2% to 3% atmospheric, and a small amount of uncondensed steam are compressed and exhaused using a multiplestage vacuum compressing system.

All subsystem will be   instrumented to measure input and output temperatures and pressures, as well as power output.  The turbine-generator nominal gross output is 210 kw.  Given the infrastructure already available at NELH, only 40 to 50 kw net will be obtained.

This facility will be the first net power and fresh water producing OC-OTEC system in the world.  As such it will further focus attention on Hawaii as the outstanding leader in the technology, while significantly advancing the state of the art.

Since the last report, significant progress has been made on the OC-OTEC NPPE Project. In September 1991, the plans and specifications for the power block were completed.   In November 1991, the final design report was issued and in December 1991, a general contractor was selected.  Subsequently, the Test Plan, Safe Operating Procedures and Operations Plans were completed in January and March 1992.   Furthermore, a Facilities Use Agreement was negotiated and executed with the Natural Energy Laboratory of Hawaii in February 1992. 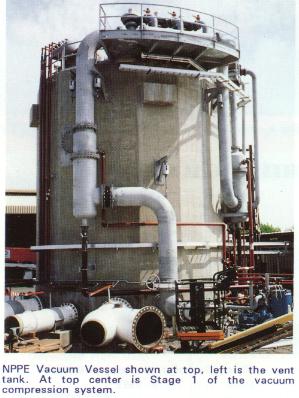 The equipment acquisition phase was completed in July 1992 and equipment delivery is ongoing.  The turbine assembly was delivered to the Kawaihae dock on the Island of Hawaii in June 1992.  The surface condenser operating conditions and required performance were established in June 1991 based on the Argonne National Laboratory design, "Brazed Aluminum Steam Passages with Extruded Water Channels."  This design was evaluated and found to meet the requirements for the NPPE.  This design was incorporated into a Request for Quotation (RFQ) and was forwarded to a number of manufactures.  Quotes and proposals were evaluated and in August 1992, Dynamic Enterprises Inc. was issued a purchase order to construct the surface condenser.

The construction and installation phase, which began in February 1992, continues as scheduled and should be completed by November 1992.  All contractor's submittals have been reviewed and approved.  The major equipment, provided by MTI Mechanical Technology (Turbine), Kato (generator), Barber-Nichols (Vacuum Compression System), Ershigs Inc. (Evaporator & FRP pipe), Johnston Pump Co. (Discharge Pumps), and Munters (Mist Eliminator & Condenser Packing), and most of the auxiliary equipment have been delivered to the NPPE construction site.  The vacuum vessel was completed and vacuum tested in August 1992.  The multiple-stage vacuum compression system, the turbine support ring, the Warm and Cold Seawater discharge pumps, and the Heat Exchanger components have been installed.

Construction of the 50-foot seawater disposal trench was completed in February 1992. In July 1992, however, flow tests conducted on the trench revealed that it was inadequate. 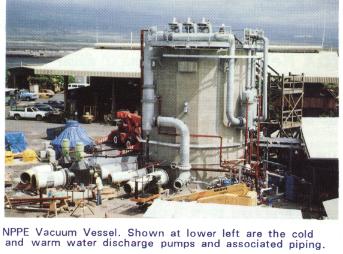 was completed Subsequently, it was decided to double the length of the trench.   In May 1992, construction of the Ground Water Monitoring Wells was completed.   The wells are required under the environmental monitoring program to determine ground water characteristics and variations due to the eventual operation of the NPPE seawater discharge trench.  Monitoring of the ground water is currently underways at the NELH.