The first Taiwan symposium on multiple product OTEC planning, opened by Dr. Shu-Jou Lee, Vice Minister of the Ministry of Economic Affairs (MOEA), was held on October 6, 1993.  The meeting was organized by Energy & Resource Laboratories, ITRI and sponsored by Energy Commission, MOEA.

The purpose of this symposium was mainly to publicize OTEC research within the country, and summarize the results of OTEC studies undertaken since 1987 by relevant government departments, and also to outline a more feasible scheme for OTEC development in the future.

Summarized below are three papers presented at the symposium:

The sediments on the continental slope off the coast of Ho-Ping, which is one of the three potential sites for land-based OTEC plants, are composed mainly of terrestrial deposits which are transported by the Ho-Ping river.  Based on the differences in transportation and distribution of particle size of sediments, this study area can be divided into north and south sections, each of which have pebble, coarse sand and clayey silt areas.  Water content and porosity in our core samples decrease with the burial depth as well as from the coast toward the sea. 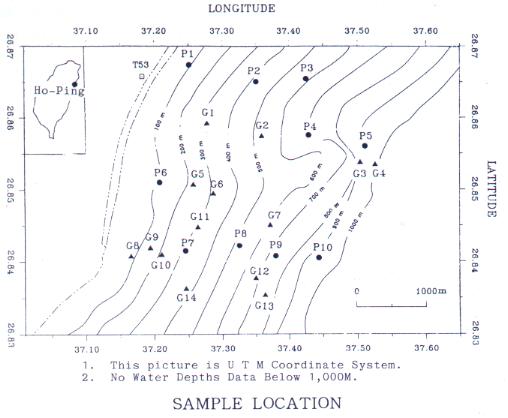 The bulk density thus increases with the obvious burial depth and the distance from the coast.  The acoustic velocity throughout the core samples shows that velocity increases with the decrease of porosity.   The shear strength profiles reveal that there are unusually high values for the surface sediments, probably due to the cementation process.  The results of consolidation tests suggest that sediments in this study area have high permeability and hence a higher consolidation rate.  The sedimentary structures include the chaotic structure, the cross lamination, the horizontal lamination, and the defromation structure, which indicate slumping activity in this study area.

From the results of the infinite slope stability analysis, the sediments in this study area should be stable under an earthquake-free loading condition. Based on the maximum earthquake-induced horizontal acceleration (100 years regression cycle) - 0.24G and slope angle - 25 degrees in the study area, we estimate that the maximun stable accumulation thickness of the sediment is about 160cm.

While a soft pipe is under negative pressure, the axial stress is more pronounced than the circumferential stress and its maximum axial stress  is somewhere close to the pipe ends.  The negative pressure due to pumping seawater would inhibit the lateral force induced by the pipeline's curvature and functions to restrain vibration.   Furthermore, initial tension of the pipe, interior material damping and external seawater damping have the same effect as the negative pressure.  Hence, there is no problem of vibration, although single lined moorings are employed.  After testing, it was found that the fiber-reinforced rubber pipe could not endure 5m water pressure head.   However, increasing annular steel has solved this problem.

The production of a 2.5m in diameter and 6m long pipe costs about 1.3million NT.   A 4km long, deepwater flexible pipe and its installation cost approximately 1.1 billion NT.  The proposed installation technique is the bottom pull method.   If 50MW is an appropriate size for an OTEC plant, eastern Taiwan would have a potential of 150 to 200 shelf-mounted OTEC plants.  We suggest that the shelf-mounted OTEC plant is the first priority goal in the domestic OTEC development.  We could first build a 1MW pilot plant in the vicinity of Hua-lien Port.  In the long run, a grazing floating OTEC plant is more promising, and a detached CWP is suggested.

The flexible underwater pipeline can  also be used for other purposes such as ocean outfall, power plant's cooling water, etc.  The installation method is single-length-floating.  The installation time should be very short.  Although pipe production cost is higher, the project may be cheaper on the whole.

Ocean thermal energy is the most advantageous form of alternative energy for Taiwan because the country is in a favorable location where the energy is one of the most abundant in the world.  A preliminary conservative estimate of the available thermal resource along the east coast is about 3,200MWe.  Using it for electrical power generation needs comprehensive planning.

The concept of OTEC development has changed from Multiple Product OTEC Project (MPOP) during the 80's to a Master OTEC Plan for R.O.C.(MOPR) during the 90's.  The former aims at the construction and operation of a land-based,

5MWe OTEC pilot plant, with mariculture as its by-products.  The pilot plant would need two years for a feasibility study and five years for construction.  The objective of the latter is to establish commercial OTEC power plants of a maximum net capacity of 500MWe.  The plants will be deployed mostly within 12 nautical-mile off the East Coast of Taiwan.   It will take five years to conduct a feasibility study and six years to build a 100MWe commercial demonstration plant.

Both concepts will serve as useful guidance for Taiwan to promote technologies in extracting its abundant ocean thermal energy.