IN JAPAN ON THE UTILIZATION OF DEEP SEAWATER RESOURCES

The world population now exceeds 5.6 billion and is increasing at a rate of 100 million per annum. World daily energy consumption per capita has also greatly increased. In this context, there is growing concern that human production and consumption may now be out of step with the "material cycle originating from sunlight as the energy source" and that the disorder caused by such activities is about to exceed the carrying capacity of the earth and its ability to maintain its environment. There is no question that almost all human beings are looking for a safe, healthy and prosperous life for the future. Therefore there is an urgent need to search and obtain clean energy and material resources in the world.

Deep seawater as compared with surface water has low temperature, high concentrations of various nutrients, and biological cleanliness, all valuable resources. In addition, there are several other advantages to its use: its huge reserves of regenerative, inexhaustible carbon dioxide. These resource characteristics can be adapted to a large variety of uses. For example, low temperature water is an ideal cooling agent for air conditioning, for desalination, and for electric power generation. Nutrients are fertilizers. Biological cleanliness is essential in cultivation media for mariculture. For the practical use of these various resource characteristics of deep seawater, it is necessary to develop technology for the efficient and economical extraction and utilization of deep seawater. Furthermore, it is most important to establish an overall utilization scheme for deep seawater rather than utilizing one particular single resource.

2. History of research and development in Japan on the utilization of deep seawater resources

Extensive effort on technological development of deep seawater resources in Japan was started in the mid 1970s. Baseline data for development of pertinent technologies have been collected through various tests of water quality and biology of deep seawater, and through field observations, examining productivity enhancement in upwelling areas. Many of these activities have been initiated by the Japan Marine Science and Technology Center (JAMSTEC). Based upon results, three schemes were conceptualized in 1984 for mariculture utilization of deep seawater resources in connection with ocean thermal electric power generation. 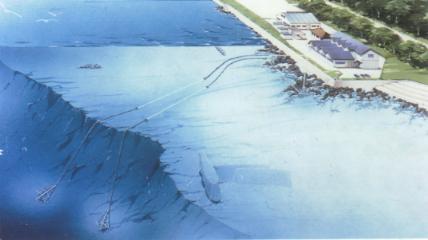 In response to these schemes, a research program on "Research and development of effective utilization technology for deep seawater resources," supported by the Special Coordination Funds for Promoting Science and Technology, managed and distributed by the Science and Technology Agency (STA), was started in FY 1986. Five years of initial support were provided. A land-based system was selected as the first project. Three years were devoted to develop designs and construct an experimental facility, and the following two years were for on-site experimentation using pumped deep seawater. The objective was to demonstrate the effectiveness of deep seawater mainly in the field of mariculture. The facility constructed by JAMSTEC was dedicated in March 1989. Employing this system as the central facility, supporting research facilities were constructed by Kochi Prefecture, and the first deep seawater laboratory was thus established in Muroto city of Kochi Prefecture. This Laboratory was named Kochi Artificial Upwelling Laboratory (KAUL: Fig. 1).

Moreover, a three year cooperative research program between JAMSTEC and Kochi Prefecture was started in FY 1991. In this cooperative research program, the main objective was to improve the functionality of the KAUL facility. A second deep seawater pipeline was constructed in March 1994. In addition, a centralized monitoring system and an energy-saving water temperature controlling system were developed and installed.

The deep seawater upwelling system of KAUL is capable of continuously pumping 920 tons of deep seawater each day from two depths, 320 m and 344 m, through two 2,650 m high-density polyethylene tubes with an inner diameter of 12.5cm. This system is also capable of pumping the same amount of surface seawater from a depth of 1 m. Deep seawater reaching the land facility is about 13 ¢J and contains about 25 µM of nitrate throughout the year. The KAUL experimental facility is equipped with a centralized monitoring system which mea-sures the quality of deep and surface seawater, the operation of the facility, and an energy-saving water temperature controlling system (compared with the conventional type, this system reduces energy-use by 30-50%).

Since the establishment of this laboratory, managed by Kochi Prefecture and JAMSTEC, basic and applied studies covering such fields as mariculture, useful products generation, and energy recovery have been conducted in close association with industrial, educational and governmental research organizations with a view to proving the effectiveness of deep sea-water resources and its practical application. ( Table 1 lists on-going and planned activities)

4. Research and development on application to mariculture of deep sea-water resources

Cultivation of phytoplankton and zooplankton using clean and nutrient-rich deep seawater for seedling production has been studied with regard to culturing methods, characteristics of growth, and nutritive value. It has been demonstrated that use of deep seawater enables energy-saving continuous mass culture and production of high-quality plankton.

Studies have been conducted on the culturing of submarine forest-comprising arame (Eisenia bicyclis) and kajime (Ecklonia cava), and edible coldwater algae such as makonbu (Laminaria japonica) and wakame (Undaria pinnatifida ) using clean, nutrient-rich, and low temperature deep seawater. Makonbu, which does not grow in the warm sea of Kochi, can be cultured in deep seawater. The growth of marine algae is better promoted in deep seawater than in untreated surface seawater.

Studies have been conducted on the culturing of coldwater fish including: Atlantic salmon (Salmo salar) and Coho salmon (Oncorhynchus kisutch); and the Northern Abalone (Haliotis discus). These species cannot normally be cultured in warm seawater areas, but their culturing has been made possible by utilizing deep seawater. Studies have demonstrated that diseases are few and survival rates are high when organisms are cultured in deep seawater. 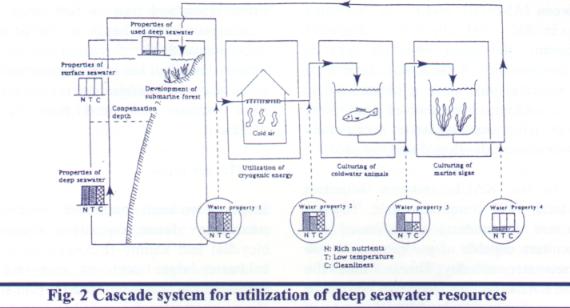 Studies are also being conducted on the culturing of the larvae of spiny lobsters (Panulirus japonicus) and of Japanese flounder over the summer growth period using deep seawater (Japanese flounder normally do not grow at an acceptable rate during the warm summer months.), and on the effect of deep seawater on the survival rate of juvenile abalone and oysters. Deep seawater has been proven to be more effective for these purposes than surface seawater.

A crucial factor in the practical application of deep seawater is development of a method by which the low-density resources of deep seawater can be concentrated and utilized. One possible approach is to utilize the biological function of organisms, an approach that is highly efficient. As mentioned above, deep seawater resources are effective for production of living organisms. This is the basis for our hope that deep seawater will be applicable to mariculture and the production of useful substances via living organisms. Another approach is to establish a cascade system in which the low-density resources of deep water are recovered and utilized exhaustively in a poly-culture system (Fig.2). Re-sources in deep seawater are successively collected in this system to the resource level of surface seawater, and the utilized seawater is then returned to the sea.

An important issue is the influence of the discharged, utilized deep seawater on the natural environment. It is essential that we develop technology that assures minimum negative impact of discharged seawater on the ecosystem of the pertinent sea area. Utilization of a near-coast local upwelling sea area as the site for a deep seawater utilization station seems promising. Such sea areas have established their own upwelling ecosystem. Therefore, if we limit collection of resources in deep seawater to a level appropriate for the sea area and discharge the deep seawater in a manner appropriate to the physical behavior of the naturally upwelled system, we should be able to see an increase in the primary productivity, an increase in the biomass, and even an increase in the carrying capacity of that sea area without negative impact. In fact, formation of an improved fishing ground may be expected. To this end, it is important to have a good understanding of the process of natural upwelling and related ecosystem processes to develop appropriate discharge technologies for these natural phenomena.

It has been being demonstrated that deep seawater is valuable and effective as a resource for mariculture, production of useful chemical substances, and energy production. Because the resources in deep seawater are regenerated by the flow of solar energy and by the material cycle through the biological processes, such as photo-synthesis, food chains, de-composition of biological materials, and other physio-chemical processes, it represents a clean and vast resource that is inexhaustible if appropriately utilized. From this point of view, utilization of deep seawater resources is a promising future technology, and it is thus hoped that studies be conducted more aggressively with a view to practical application in the future.

The author wishes to thank the late Dr. K.R. McKinley, Administrator for Energy and Ocean Resources Programs of the HNEI of the University of Hawaii at Manoa, for his helpful comments and suggestions. This paper is partlybased upon work supported by the Special Coordination Fund for Promoting Science and Technology of the Science and Technology Agency.

Table 1. Themes of research and development being carried out at Kochi Artificial Upwelling Laboratory