An extensive, environmentally beningn source of energy for the future.

The Extent of the Resource - OTEC represents a tremendous potential energy resource for the future. Figure 1 shows contours of the annual average temperature difference between the sea surface and 1,000 m depth for the world ocean. OTEC is feasible with temperature differences of 20 ¢XC or greater, so all of the area between these contours in Figure 1, i.e. most of the area of the tropical ocean, is available for extraction of energy. Though the relatively small available temperature difference limits the achievable thermodynamic efficiency to less than 3%, various methods yield estimates that about 10 TW (1013 watts) of continuous electrical output could be extracted from this resource without significantly changing the thermal structure of the ocean. The sun continues to replace heat removed from the surface layer, and the tremendous mass of the cold deep ocean water (the average temperature of the ocean is 3.5¢XC) represents an essentially inexhaustible heat sink. OTEC could thus potentially supply most of the present energy consumption for all human activities, which was estimated at 386 EJ/yr in 1997 (1 EJ = 1018 J, 386 EJ/1.22 x 1013 W = 12.2 TW) Other non-nuclear alternatives to fossil fuel energy sources, such as hydroelectric, wind, photovoltaic, geothermal, waves and tides each have, with presently available technology, at least two orders of magnitude less potential than OTEC.

Figure1. Distribution of the OTEC Resource. This map portrays contours of the
annual average temperature difference between the surface and 1000 m depth
throughout the world ocean. Since OTEC will work where the temperature
difference is at least 20¢XC, the orange to red colors on the map show that the
resource is generally available between the tropics.

OTEC can fulfill its tremendous potential with minimal impact on our environment. First, OTEC is not inherently exothermic, so large-scale utilization will not contribute directly to global warming. Also, though the deep and surface seawater do contain dissolved carbon dioxide, straightforward engineering techniques can prevent its release into the atmosphere, so that OTEC produces much less greenhouse gas than fossil fuel generation systems. In addition, reasonable engineering and suitable spacing of plants throughout the tropical ocean can keep impacts on ocean temperatures and living resources well below objectionable levels.

The feature that most distinguishes OTEC from other renewable energy sources is the tremendous range of by-products that derive from downstream uses of the cold deep ocean water (Figure 2). The following paragraphs summarize some of those that have been investigated at the Natural Energy Laboratory of Hawaii Authority.

The most financially attractive of these by-products at the present time is "space cooling" (air conditioning). The cold seawater can either chill freshwater in a heat exchanger or flow directly into a suitable chilled water loop, effectively replacing the chiller which consumes more than 90% of the energy of a traditional air-conditioning system. Simple systems of this type have operated for several years cooling buildings at NELHA, saving almost $4000/month in electricity costs for the facility. Economic and engineering analyses indicate that the payback period may be as short as 3 or 4 years for commercial-sized projects. Developers in many tropical locations, such as Curacao, the Philippines, Guam, and the Cape Verde Islands, are seriously considering installation of deep seawater air conditioning systems for new resorts. The positive experience at NELHA has led Cornell University in Ithaca, New York, to install a "lake source cooling" system that uses cool water from nearby Cayuga Lake to cool the campus in the summer. The University determined that the reduction in energy usage and consequent reduction in CO2 emissions to the atmosphere more than justified the investment in the project. This system now serves as a model of potential savings for new developments in the tropics.

The deep seawater represents a large" heat sink" for many potential industrial applications. Specific examples tested at NELHA include condenser cooling for distillation processes, moisture and CO2 removal during drying of algal products and cost-effective assistance to refrigeration and freezing systems.

Cold seawater flowing through underground pipes chills the surrounding soil, providing a large temperature difference between roots and leaves - a "perpetual springtime" for plants. Many temperate plants thus thrive in an arid sub-tropical climate where they would not normally grow. The cold also induces significant condensation from the humid atmosphere, providing a large fraction of the irrigation needed for the crops.

The most visible and publicly recognized by-products of OTEC are the wide range of marine organisms that are being grown in suitable mixtures of deep cold and warm surface seawater being pumped ashore for OTEC research and development. The deep seawater is important to aquaculture for three basic characteristics:

1. Its cold temperature not only allows culture of many valuable organisms - such as salmon and Maine lobster - that would
not normally grow in the tropics, it also provides cost-effective temperature control of large seawater volumes over a wide
temperature range.

3. The water is clean - it contains few of the pathogens that typically cause problems with culture of marine organisms.

Many private companies are now commercial tenants at NELHA, growing a variety of valuable crops in suitable mixtures of surface and deep seawater. Organisms now being cultured include: microalgae such as spirulina (a popular healthfood supplement) and hematococcus (being used as a source of astaxanthin, a pigment and pharmaceutical), macroalgae (seaweeds being cultured largely for local consumption in Hawaii), oysters (being grown both for food and pearls), clams, abalone, shrimp and food fish such as hirame (Japanese flounder used in sushi) and moi (pacific threadfin), a Hawaiian fish delicacy.

Though the OTEC resource is very large, it exists mostly where people don't (Fig. 2). There are at most a few hundred land-based sites where deep water is close enough to shore in the tropics to make land-based OTEC plants feasible. Any significant development of the resource will, therefore, require siting of plants in mid-ocean. Not only is the cost of working at sea higher than on land, but there are also problems with transmitting energy generated offshore to land-based populations. Deep sea cables would be very expensive and are not efficient for long range power transmission, and alternative transmission schemes, such as microwave transmission via reflecting satellite, aren't feasible with current technology. The solutions currently considered most viable involve using electricity generated by OTEC on offshore platforms to produce alternative fuels such as methanol and, eventually, hydrogen. OTEC could thus become a major comp onent of the hydrogen-based economy that
many envision for man's energy future. 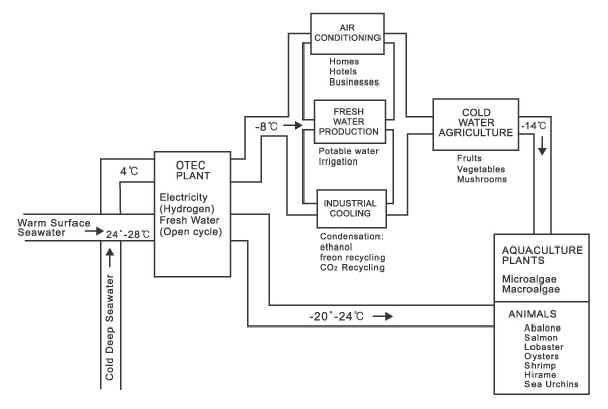 Figure2. Schematic Diagram of a Multi-Product OTEC System. The seawater dischage from
an OTEC plant can supply large volumes of flowing seawater at any temperature between the
4¢XC of the deep seawater and the minimum 24¢XC of the surface seawater-merely by twisting a
valve. The value of this resource in the tropics is limited only by the imagination of the user.

The OTEC cold water pipe (CWP) must transport large volumes of deep seawater to the plant from about 1000 m depth. For shore-based plants, the CWP must be at least 3 km long, even with the steepest bottom slopes known. Small pipeline diameters are inherently inefficient, due to friction losses and temperature increase. Because of this and the fact that the CWP represents almost 75% of the cost of current plant designs, optimization studies conclude that plants smaller than about 50 MW cannot compete economically with other present energy alternatives. A 50 MW plant will require about 150 m3/s of deep seawater, necessitating a pipeline with an inside diameter of at least 8 m. Current technology requires costly reinforced concrete pipe (RCP) or even more expensive fiberglass reinforced plastic (FRP) materials for pipelines of this diameter. Proposals for developing "soft" pipelines, which deploy the pumps at the bottom end and use the water to "inflate" the pipe, offer hope of significantly reducing the cost of these large pipelines.

OTEC is inherently a large-scale technology, requiring a large capital investment up front. The size of the investment dictates that, even though the process requires no fuel and will have relatively low operating costs, the investment will only be recouped over a number of years. The economic viability of OTEC is thus determined by factors such as the financing cost, the plant life-cycle and the future cost of competing energy sources. If an OTEC plant could be guaranteed to operate for 30 years without major overhaul, conservative projections of energy cost and interest rates predict a 30% return on investment, and investors would be eager to invest. However, it is not possible to predict the life cycle of a 50 MW plant from the limited intermittent operation of the largest plant built thus far, the 250 kW open cycle experiment at NELHA. World Bank advisors have determined that a pilot plant of about 5 MW operating for 5 years would be needed to justify investment in the full-scale technology. Such a plant would still be very expensive, however, and it would almost certainly lose money.

In addition to the pilot scale plants planned for Diego Garcia and Keahole Point, the State of Madras, India is preparing to build and test a 1 MW floating plant offshore. Sea Solar Power, Inc. of York, PA, USA has proposed a 10 MW pilot plant on Guam and 100 MW floating plants for several areas around the world, but has been unsuccessful in obtaining financing. The Puerto Rico Electric Power Authority has investigated OTEC for many years and has recently considered a plant on the offshore island of Vieques that is now used as a target island by the US Navy. The Japanese continue research and development on OTEC and sponsored a major 1999 symposium on OTEC and other deep ocean water applications (DOWA). The Taiwan government has a long-standing interest in OTEC, and HsinChu is home to the International OTEC/DOWA Association (IOA), which publishes a quarterly newsletter that serves as the primary link between OTEC/DOWA researchers worldwide.

As noted earlier, many island locations throughout the world are seriously considering installation of deep seawater supply systems for air conditioning. Most plan to develop additional by-product industries around the pipelines thus installed. Though such systems will not be of sufficient scale for economical OTEC power generation, they may lead to engineering developments in pipelines and pumps that will improve the feasibility of larger-scale OTEC systems.

In summary, OTEC has been shown to work at research scales, and plans are underway to build pilot scale plants. Private sector developers will probably be unwilling to make the enormous initial investment required by the inherent large scale of commercial OTEC until the price of fossil fuels increases dramatically and/or governments provide suitable financial incentives. If, however, the pilot scale plants now being planned for some expensive-energy niche markets are successful in demonstrating low-cost long-term operation, OTEC will be much more financially attractive. As it offers tremendous potential for reducing the input of CO2 into our atmosphere, the development of OTEC should not be further delayed.