Due to the price instability of hydrocarbon fuels, the major impact of such imported fuels on economics, and significant concerns for the environment, many Pacific Island and other developing nations have expressed great interest in finding competitive alternate energy concepts.  Ocean Thermal Energy Conversion (OTEC) has been shown to be one of the most promising environmentally benign, alternative energy concepts available for producing baseload electricity in tropical waters.  Enormous resources of solar energy are stored in the surface waters surrounding many Island nations, that dwarf the energy required to support and maintain aggressive economic development.

With the above characteristics in mind, plus the availability of low-risk, closed-cycle OTEC technology, the Government of the Marshall Islands elected to conduct a Design, Economic, and Financial Feasibility Study of a 5-10 MW, multi-product OTEC plant, to meet the future energy needs for Majuro.  Grant funding for the Study was obtained from the U.S. State Department's Trade and Development Agency (TDA), a competition was conducted, and Marine Development Associates, Inc. (MDA), of Saratoga, California, selected as the study contractor.  The Study Industry team included support by Makai Ocean Engineering, Inc. (Hawaii), Fluor Daniel Corporation (Texas), and Pacific International, Inc. (RMI).

The |Study Program's major objectives were as follows:

¡± Define a facility design concept, its capital cost, and economic viability, including sale of
electricity, fresh water and cold, nutrient-rich seawater, for a reliable and near-term, commercial
closed-cycle OTEC plant.>

¡± Define a Project Financial Plan and establish feasibility of attracting sufficient private investment
capital to make this a viable, near-term energy project for the Marshall Islands.

The contracted study begin in April 1993, was completed in April 1994, and is currently being evaluated by the RMI Government.

The majority of program design activity was spent in optimizing the Power Plant concept for the Majuro site locations, gathering and integrating basic system cost data.  In obtaining component cost data, MDA worked directly with multiple suppliers of such major subsystems as heat exchangers, turbine/generators, auxiliary equipment, and the platform to insure and optimize system integration. For example, low-cost, heat exchangers were evaluated, with the varying complexity of installation piping, repair and maintenance requirements, to satisfy the demands of a commercial power plant and private financing.   This analysis required full powe-system installation layouts, and piping, connection flange, and valve analysis, all of which played a major role in selection of a low-risk, off-the-shelf heat exchanger design.  Selection of all major power system components has been based on proven desings and technology.  A summary of the technology assessment for the principal subsystems is shown in Figure 1.

Major emphasis has also been given to the most sensitive technology requirement for a viable OTEC plant, namely, a reliable, low-cost and low-risk cold water pipe design.   The power plant design concept, which has emerged from these analyses, can be summarized in general as follows:

¡± A concrete, floating (but sinkable) platform, into which the power system can be installed and
operated in a controlled environment, tested, transported to Majuro, and installed on a prepared,
lagoon-shore site.

¡± A low-cost cold water pipe design, based on MDA's semi-rigid "soft pipe" concept, and installed
on the seafloor in a manner to minimize the impact of typhoon-type storms.   The CWP design
also includes the capability of recovering the pipe from the seafloor, to minimize capital risk and
permit repairs should damage occur in a typhoon.>

Capital costing of the above configuration and its installation at Majuro proved to be very encouraging. Economic analyses have shown that, under the Financial Plan developed by MDA for this first commercial OTEC power plant, a return of over 15% on private capital required can be realized, with a price of electricity less than the current real cost of diesel-electric power at Majuro.  With OTEC being one of the very few alternate energy concepts that become less expensive per kW of electricity produced with increasingly larger generating units, this result was very significant. 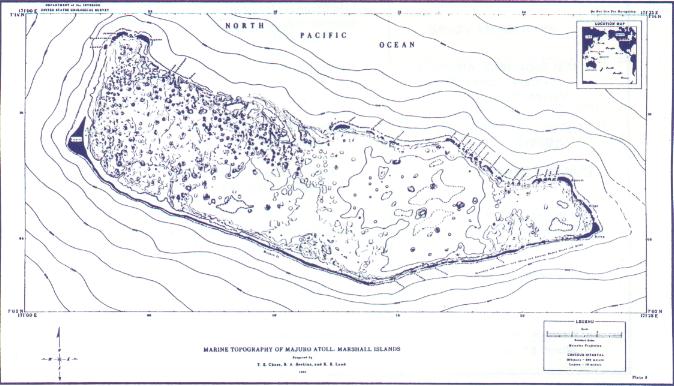 Primary conclusions of the study can be summarized as follows:

¡± Without question, the design and technical feasibility of the closed-cycle, multi-product OTEC
power plant has been defined and established as ready for commercialization.

¡± Consideration of technology advances achieved in heat exchangers and cold water pipe designs,
and the associated cost reductions available, have established 5-10 MWe as a viable economic
power plant size for Island applications, with costs of electricity competitive with real costs of
energy in many developing nations.

¡± The benign impact of OTEC power on global warming, i.e. no hydrocarbon CO2, is of significant
interest to the U.S. and world governments.  The Program has the potential of being declared a
"demonstration" program of such and attractive, base-load alternate energy power plant for
developing nations.

¡± As an operating 5MW commercial power plant, the proposed facility can play an important role
for measurement of environmental impact data, training of OTEC operators, and a test facility for
scaled-up components incorporating advance technology. Modest investment in the RATAK
facility could provide major risk reduction for development of larger OTEC facilities, such as the
planned Taiwan 500MW power plant.>