Prof. Umberto Colombo, President of ENEA (Italian National Commission for Nuclear and Alternative Energy Resources) and concurrently, serving as the President fo European Science Foundation, in his recent visit to Taipei, offered the following views: "With regards to the exploitation of the energy potential of the oceans, OTEC ( Ocean Thermal Energy Conversion ) finds its ideal climate in the tropical regions and Taiwan has been judged to be the best suited country for this application." He also reiterated that how important it would be for Taiwan's scientific and technological reputation worldwide, if Taipower were soon to decided to build and operate a pilot plant demonstrating OTEC technology in Taiwan, and East Coast, an area in Taiwan that is relatively underdeveloped.

Prof. Colombo noted that while it is not expected for a pilot plant to be a profitable venture, it could be the source of important patents and know-how and furthmore it would comfirm that the economy of this renewable energy technology is greatly improved by making appropriate use, for example in mariculture, of the cold, nutrient-rich and germ-free deep water once it has been pumped to the surface.

Prof. Dr. Colombo is an internationally known and well-respected expert in the energy field. His organization (ENEA) has recently been expanded to cover also new trchnology and environment. Prof. Colombo's services have been very much in demanded, not only in his own country and in Europe, but also in other parts of the world. He has been serving as Energy Advisor to the Prime Minister of R.O.C. since 1987. 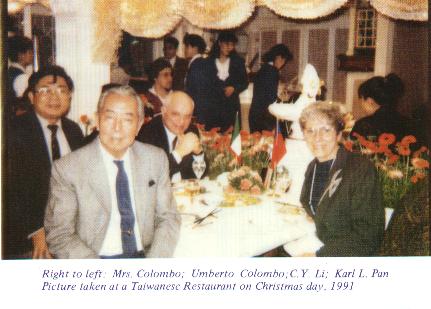