OTEC RESEARCH IN ETL AND SIT

Since 1974 Japan has been one of the countries promoting research and development programs on OTEC and DOWA such as Sunshine Project, Nauru Project, Tokunoshima Project, Deep Seawater Utilization Projects and so on. 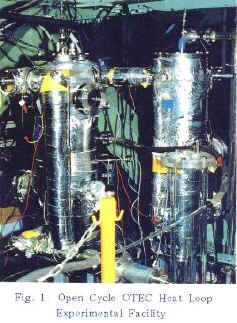 A number of organizations are involved.  Ocean Thermal Energy Conversion Association of Japan (OTECAJ) has been investigating and planning OTEC total systems to be used in the Pacific islands region.  Ocean Energy Application (OEA) Research Committee,  supported by National Institute of Science and Technology Policy (NISTEP), has been investigating how to introduce OTEC systems into social life as soon as possible from the sociological point.  Japan Marine Science and Technology Center (JAMSTEC) and Deep Seawater Laboratory of Kochi have undertaken research and development of deep seawater application from the point of fishery science.  Research Institute for Ocean Economics and Toyama prefectural government have been interested in deep seawater application to develop some plans.  Saga University, which has contributed very much to the development of OTEC technology in Japan since 1974, has done research on Kalina cycle to improve the efficiency of a closed cycle OTEC system.   Electrotechnical Laboratory (ETL, AIST,MITI) and Shonan Institute of Technology (SIT) have undertaken research on the enchancement of OTEC system performance, in particular, for an open cycle OTEC power generating system.

In this article, recent activities on OTEC research at ETL and SIT is introduced briefly. 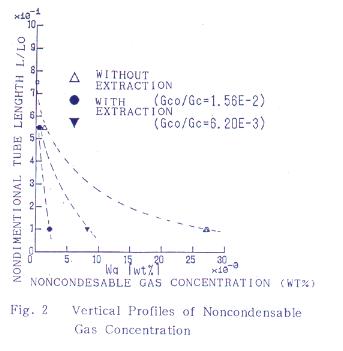 At ETL, theoretical research and experimental investigation on the behavior of noncondensable gases have been started.  A small scale heat loop experimental facility was designed and constructed as shown in Fig. 1.  The test facility was equipped with both a direct contact evaporator and a shell & tube type condenser.   In order to determine the optimum amount of non- condensable gases for an open cycle system, the preliminary estimation was carried out. In the analysis, the effect of the concentration of noncondensable gases on the condensing heat transfer performance and the condensing temperature was estimated based on the existing experimental data.   And the exhaust pumping power per unit of warm water flow rate was obtained as a function of removal rate to determine the maximum net power output.  The size of a shell & tube vertical type condenser is 150mm in shell diameter, 1000mm in height, 20mm in smooth tube diameter and 1000m in effective tube length, the transient performance of heat duty, condenser pressure and condensing heat transfer are investigated in the case of no extraction of noncondensable gases from the system. 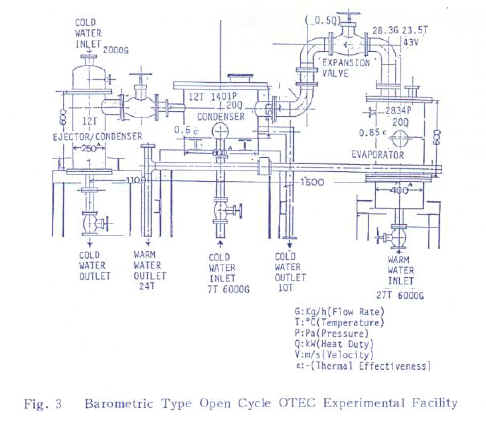 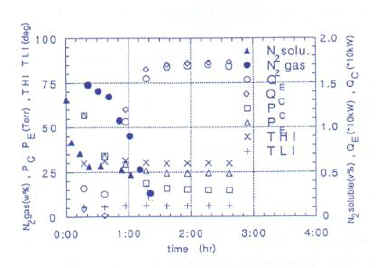 In order to clarify the behavior of the barometric type open cycle OTEC system based on Torricelli barometer due to the external disturbances such as wave motion, warm water temperature, tidal motion and atmospheric pressure, a 20 KWT class barometric type open cycle OTEC experimental facility has been just completed in ETL as shown in Fig. 3.   The start-up behavior of the system is shown in Fig. 4. The thermal effectiveness of both evaporator and condenser, and the noncondensable gases are also investigated.   Preliminary results indicate that the heat duty per water flow rate was 1.7 times compared with that for a closed cycle OTEC system.

In order to obtain fresh water for a conventional open cycle OTEC system, a surface type condenser should also be installed. The seal between the seawater side and condensing side is very important for such a surface type condenser operated under low pressure, which as innumerable sealing points.  The perfect seal can be achieved from a technological point, but is difficult from an economical point, because the adoption of double sealing and checking process would be needed additionally.  Hence, it is difficult to substantially reduce the cost and to obtain high reliability for an open cycle system with a conventional surface condenser as compared with a closed cycle OTEC system.  Fig. 5 shows the basic concept of  one element of the direct contact condenser partially functioning for desalination which is called multi-function conical channel. 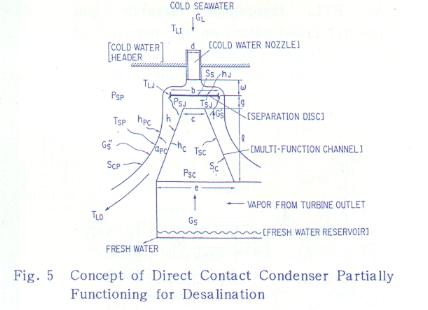 The relationship between the ratio of fresh water rate to overall vapor flow rate and design parameter is investigated.  For 1MWe class open cycle OTEC power plant with 580 ton/day of fresh water, 2,800 units of multifunction conical channels of the size 300mm in bottom diameter, 120mm in top diameter and 500mm in height are required.

Basic research on OTEC system to enhance the power generating performance and to reduce the cost substantially will be carried out in the future with technological break-throughs.

Although Japan doesn't have many proper sites for OTEC and deep seawater utilization systems, government, private sector and academia are interested in the development of OTEC technology to apply to the tropical region from the global point of view.