OTEC concepts and designs are based on the oceanographic conditions in tropical and subtropical regions, where warm and salty surface water overlies colder and less salty deep water. This is not generally the situation for oceanic and coastal waters in the higher latitudes, where the less salty surface water is on top of saltier intermediate water.

The temperature stratification in upper layers may resemble the tropical counterpart during summer, but will be reversed during winter (cold water on top). Still it is possible by various means to extract and convert ocean thermal energy also in the high latitudes, as is explained below.

The sea water temperatures in the cold hemisphere are generally significantly lower than in tropical regions. The maximum surface values in sub-arctic bays and fjords may be around 15-20 ¢J during short summer periods. The commonly observed sub-surface temperature maximum during winter, persisting after the onset of surface cooling, will still be 10-20 ¢J lower in temperature than the typical tropical surface values of 20-30 ¢J.

The heat-sink side in OTEC context is in general of no problem in the high latitudes, as either the surface water or the deep water has temperatures around 0 ¢J, and air temperatures above may be down to say -30 ¢J. Thus the over-all obtainable temperature differences in connection with OTEC are on the same order of magnitude as in lower latitudes. The difference in hydrographic characteristics do not exclude the high-latitudes as OTEC sites, in the wider sense of ocean thermal energy conversion. Some benefits in the high latitudes, as compared to other regions, may be:

1 An order of magnitude larger vertical temperature and salinity gradients

4 Several applications in shallow and / or enclosed basins

8 Lower cost of construction, and essentially no operational cost

The demand for alterative electric energy may presently not be in favor of the development of "standard" OTEC concepts in areas such as Scandinavia with large hydro-electrical potential and long-lasting oil / gas reserves. The basic OTEC process with a working fluid and a condenser / evaporator to produce electric power may still be applied in the colder regions for power supply in remote areas. However, the largest potential for thermal energy conversion may lie in the generation of vertical flow to enhance water mixing and circulation, and stimulate marine primary production. This was one of the conclusions made after a theoretical study recently performed by NIVA, the Norwegian Institute for Water Research, in Norway, and Thayer School of Engineering in New Hampshire, U.S.A.1

The primary goal of the study was to come up with suggestions to withdraw potential energy from the water column of stratified waters in high latitudes, and convert some of it to kinetic energy. Since both the sign and size of the temperature gradient change with the seasons, special considerations have to be made. 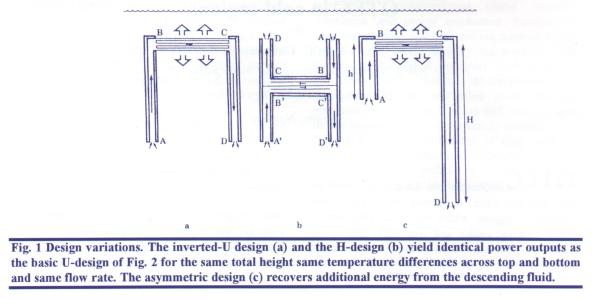 During summer, when the low-salinity surface water is warmed, the water column will be stably stratified in both salinity and temperature. If the surface temperature exceeds a certain value, no potential energy may be retrieved. This value is determined according to the pending values of salinity and of the thermal and haline expansion coefficients for the equation of state of sea water. When modestly warmed, and when cooled on top during winter, potential energy may be retrieved from the water column by a specially designed "diffusion pump".

To retrieve the energy and convert it into self-sustained tube flow, different tube and radiator configurations are possible, both in closed and open/semi-open circuits connecting the warm and cold water strata. It has been calculated that a self-sustained flow of about 1 m3/s across the thermocline in a Norwegian fjord could be maintained with modestly sized equipment, say 10-20 m vertical tube lengths and 10¡Ñ10m horizontal radiator area.

In principle the equipment may work un-attended for long periods of time. By means of an on-board computer connected to sensors and small winches or buoyancy control mechanisms that enable automatic adjustment of tube angles and radiator depth, the flow may be optimized according to the present hydrographic conditions, which we know will change on both on short (over days) and long (seasons) time scales.

The self-sustained flow from one or several connected pumps may serve several purposes, depending on the demand. Norway has a large and growing aquaculture industry, with the weight on salmon ranching in the fjords. Locally enhanced water exchange in the cages of such plants, and the continuos supply of deep water free from contaminants and algae into the cages may lead to increased production and less environ-mental problems. A low-cost self-sustained diffusion pump might handle this. Other fields on which the diffusion pump may work, may be in reducing local ice formation in winter-time by increasing surface temperatures and turbulence. Also it has been suggested that the pump may stimulate the renewal of otherwise stagnant deep water of fjords commonly found behind a shallow sill at or near the mouth. This deep water may be completely depleted of oxygen, and the hydrogen sulphide gas often measured poses a permanent threat to organisms in overlying oxygenized water strata. 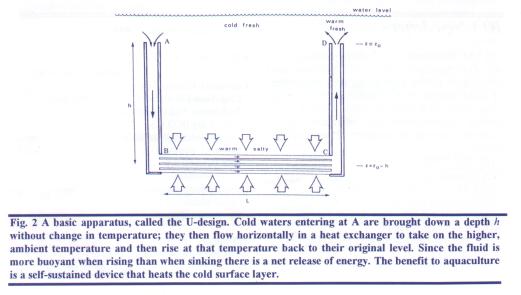