An abstract of an article that appeared in Sea Technology, October,1991. The abstract is prepared by Carrie Matsuzaki, Member, IOA and Contributing Editor of its Newsletter.

In 1979, a closed-cycle power plant demonstrated for the first time that an OTEC plant could produce more power that it consumed. A consortium that included the state of Hawaii, Lockheed, Dillingham Corporation, Alfa-Laval, and others built a plant that produced 50 kilowatts gross and 18 kilowatts of net electircal power.

In 1987, engineers from the Solar Energy Research Institute and Argonne National Laboratory produced 8,000 gallons per day of fresh water from the ocean. The research apparatus, installed at the Natural Energy Laboratory of Hawaii, used thermal energy stored in seawater to generate water of a salinity of 86 parts per million, which is suitable for drinking and raising crops.

Heat exchangers represent a large fraction of a closed-cycle plant cost because of the low temperature differences between the warm surface water and colder deep water.Tests conducted by Argonne National Laboratory on several designs showed that data obtained from small units and even single tubes could predict performance of large exchabgers.

Tests showed that biofouling of the heat exchangers by warm seawater can be prevented with chlorination of 50 to 100 parts per billion for one hour per day. This level is environmentally acceptable. Samples exposed to cold seawater did not show fouling.

Aluminum alloys rested in warm seawater show acceptable corrosion resistance and alloys tested in cold seawater showed minimal pitting. Use of aluminum heat exchangers is desirable because of low cost, ease of fabrication, and good heat-transfer properties.Copper-based materials that have been traditionally used in marine heat exchangers are not suitable for use with ammonia, the preferred working fluid for closed-cycle OTEC.

The NPPE is designed to produce 215 kilowatts of electrical power (Ed. note: see IOA Newsletter, Vol.2, No.3) using the open-cycle OTEC process. Under the direction of the Pacific International Center for High Technology Research, the experiment will allow testing of both direct-contact and surface condensation. In a direct-contact condenser, no fresh water is produced as a by-product while a surface condenser separates exhaust steam from the cooling seawater, allowing the production of fresh unknown. In the open-cycle concept, the turbine is a major unknown. A large effort has been made to design and consrtuct a suitable turbine for the NPPE; it will be a radial-inflow design with a ninefoot diameter.

Ten-megawatt,   shore-based closed-cycle plants are within established design technology and plant-design concepts have been developed. Economics of such plants can be bracketed but they do not produce fresh water. However, closed cycle with a flash evaporator (hybrid cycle) produces power and water. This has not been built as a system but the components have been tested and there are no major unknowns.

Open cycle produces power and can produce fresh water with the use of a surface condenser. The ability of the open-cycle concept to produce net power has not been shown, but successful testing of the NPPE will demonstrate this.

The future of OTEC depends on both economic and technical factors. Main economic factors are:1)capital costs that are high in relation to costs for conventional plants and success in reducing these costs; 2)costs of conventional fuels; and 3)marketability of fresh water produced by open-or hybrid-cycle OTEC.

Before any commercial OTEC plant is built, a smaller demonstration plant must prove economic and operational feasibility. 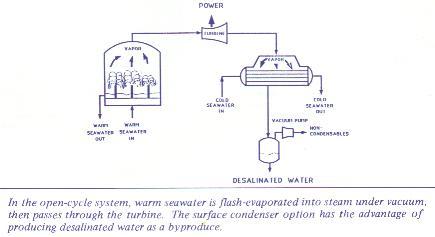 Many believe that OTEC will first be commercialized in small island markets where both power and waer are in short supply. There are many potential markets in the Pacific and Caribbean areas where such plants, in the range of 10-40 megawatts, could be built.

Several islands have been identified as potential sites for the initial development: the Hawaiian Islands, Puerto Rico, Guam, Jamaica, the U.S. Virgin Islands, the Philippines, Fuji, American Samoa, Barbados, and the Dominican Republic.