The sea, the sea, ever renewed...Paul Valery

The Seas reveal many vast and diverse energy sources wind, waves, currents, tides, marine photosynthesis, geothermal and ocean thermal !Vwhich are too often only considered individually. Also, some renewable energy sources, often converted on land, can be more efficiently sea based. Wind energy is a typical example, where land features reduce its intensity and limit its locations. Land based wind farms have proven themselves to be visually unacceptable to many, while solar farms often occupy too much valuable land.

To best profit from the many renewable energy sources available at sea, the concept is to create an !¡±Energy Island!¡L which would take the form of a floating platform designed to harvest all usefully available energy sources, none acting in isolation, but all being brought together so that each acts to complement the other, adding its contribution to the whole.

A typical !¡±Energy Island!¡L may be of a hexagonal shape, measuring 500 meters along its shorter axis, with a surface area of 22 hectares. The hexagonal shape allows islands to be joined in clusters or linear modes according to planning intentions. Such an island is designed to provide a total of 250 MW, with 1/3 of the energy being contributed by ancillary sources and 2/3 by OTEC. The !¡±Energy Island!¡L is designed to utilize the following sources of energy.

Wave Energy: On the windward side, the island features linear wave energy converters, which can use one of the many different systems invented. Whether it is the oscillating water column, the !¡± lagoon!¡L , or another system, these converters play two roles in protecting the island from the heavy seas and then providing hydraulic energy to the platform to induce fluid flows or to generate electricity.

Wind Energy: Wind energy at sea is at its strongest, unaffected by land masses. The !¡±Energy Island!¡L has six large aerogenerators, three at a lower height (OMIT) to intercept the !¡± sea-hugging!¡L wind flow, while three are at greater heights to capture the upper wind flows. The hydraulic masts are able to adjust the heights of the aerogenerators to best harvest the wind potential from different directions. 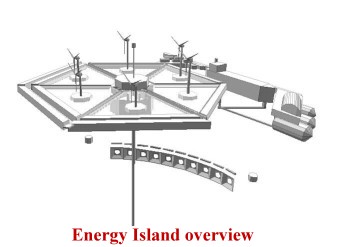 Sea Currents: Sea currents are powerful energy sources and can be intercepted by !¡± nets!¡L made up of linear arrays of cowled turbine units held up below the !¡± Energy Island!¡L by moored buoys between which they are stretched. Each unit has its own separate flotation buoy, the array taking up a slight catenary curve under pressure from the current. The main moored buoys have the capacity to be relocated below the island to accommodate shifts in the current direction. The array is positioned at a depth where it is little affected by wave energy, which is mostly expressed down to a depth equivalent to one sixth of its wavelength.

Solar Energy: Solar energy at sea level is at 900 Watts/sq.m, when the sun is directly overhead, and can be collected in many different ways. The hexagonal plan of the !¡±Energy Island!¡L suggests the possible use of a centrally located !¡±power tower!¡L furnace onto which are focussed heliostats or mirrors that can follow the sun, providing furnace temperatures around 800 ¢FJ which would allow relatively efficient electricity generation. Waste heat recovery of temperatures near the boiling point of water can be used and stored to assist thermal processes such as Ocean Thermal Energy Conversion (OTEC).

OTEC: OTEC in tropical waters can be the main source of electricity, with a combination of closed and open cycle systems for efficiency at different temperatures combined with desirable sea water distillation for a number of on- !¡± Island!¡L activities. All waste heat from the solar farm is used to enhance the surface water temperature, the surface water being channeled to the centrally located power plant along the six radial canals going to the outside apexes of the hexagon where floating dark membrane solar collectors optionally enhance the inlet temperatures. All warm and cold water pumping being carried out uses the ancillary energy sources deployed; these measures increase Carnet efficiencies and prevent OTEC from wasting the energy it is itself generating.

Apart from its electricity contribution, the !¡± Energy Island!¡L is designed also to produce hydrogen. Because of the fluctuation of renewable energy resources, an energy storage system is required. The !¡± Energy Island!¡L relies on a hydrolysis plant to produce stored hydrogen and oxygen, part of which can be used by fuel cell technology as necessary to balance the power output for both external and internal uses. Part of the fuel can, in some cases, be tankered or pipelined to other destinations, when the electricity produced is not totally used by cable links to nearby destinations.

The !¡±Energy Island!¡L will also produce a base for Controlled Environment Agriculture (CEA) and Mariculture. In tropical latitudes, greenhouses need to be protected from the sun, a role performed by the heliostats, and well ventilated or evaporatively cooled. The 22-hectare platform can therefore be used for CEA, using part of the distilled water from the open OTEC cycle for hydroponics. If the floor is trellised, light can reach the seawater below, where pens would contain various forms of marine life.

Harbours and Housing: On the leeward side of the island or islands, the !¡±Energy Island!¡L needs to provide housing for staff, social facilities, workshops and harbours.

The !¡±Energy Island!¡L uses many diverse renewable energy sources, bringing their converted powers together in the most efficient way to provide electricity for the grid, and, by hydrolysis, hydrogen fuel for transport to nearby or distant population centers, where it can be used efficiently by fuel cell technology. The !¡± Energy Island!¡L can become a major supplier of electricity and hydrogen fuel for a pollution free society, and liberate the world from the perils of nuclear power generation, and from its political, economic and polluting dependence on dwindling fossil fuels. The !¡±Energy Island!¡L therefore constitutes a new departure, demonstrated to be all the more necessary by the visible signs of pollution and global warming, and the frightening fact that world energy use is expanding exponentially, having doubled in the last thirty years. Action is needed to bring about change and turn the tide.