After the drastic 1985's reduction of the cost of oil, IFREMER had to pospond the construction of the 5 MW OTEC plant which had been designed for Tahiti Island. The cost of the plant was evaluated to 500 millions Francs (1986) and such an investment appeared out of measure with the prioritaries needs of the French Polynesian islands and in general with the expected middle term economical prospects for OTEC development.

Economical evaluation had shown OTEC plants producing both electricity and fresh water might compete with electricity and desalinated water produced in standard plants running on oil but, despite the need for both energy and fresh water exists in some regions of the tropical zone, we were unable to identify a real market since most of the needing countries are developing countries which can afford neither to buy fresh water and KWh at the "market" cost for these products or invest on their national funds in the expense (and the risk) of building an OTEC MW prototype.

To reduce the investment cost of a first OTGA realization it was then decided to design a single product OTGA plant producing only fresh water (without OTEC).

A significative size for such a prototype was chosen at 500 cubic meters of fresh water per day. The size of the cold water pipe was set at 0.5 meter, this diameter reduces drastically the development and construction cost and also the technical risk of DOW piping. 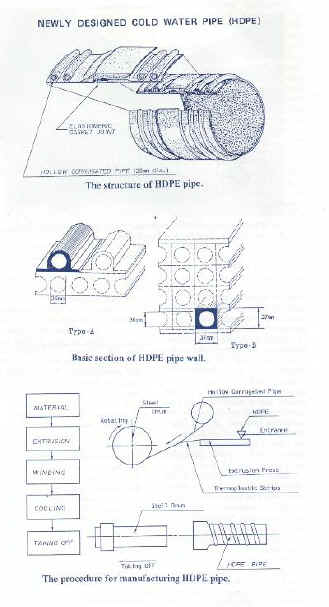 The nominal energy "cost" for producing 1 cubic meter of fresh water was found to be of 6 KWh. This was roughly identical to the energy needed to produce water from traditional desalination plants (as those using vapor compression processes). In other words the OTG desalination plant we had designed was not economically competitive.

Because the thermodynamical process involved in OTG desalination is a low temperature and low pressure process, it was decided to try to improve the efficiency and the investment cost of the plant by using thin plastic tubing instead of metal tubes in the heat exchangers. The French Atomic Energy Agency (AEA) had been working on this type of heat exchangers and we contracted their laboratory to conduct tests in thermodynamical conditions identical to those of an OTG desalination plant.

The test results were quite promising since the "energy cost" of the plant was decreased to 4 KWh per cubic meter of fresh water produced as compared to the previous value of 6 KWh/cubic meter.

Nevertheless when comparing the total cost of water produced by this improved OTG desalination process to traditional desalination plant, the improvement was not found sufficient to counterbalance the overcost of the piping system supplying the plant with Deep Ocean Water, (DOW).

But we found the results obtained by this improvement in technology for low temperature, low pressure heat exchangers is interesting enough and worth to be presented here. (Michel Gauthier, IFREMER, France)