A considerable world-wide body of experience, knowledge and lessons is now available on Ocean Thermal Energy Conversion (OTEC) but there has never been a real international continuum to permit exchange of this information. With the 21st century almost here and with global concerns about resources and environmental quality, time has come to increase the world's efforts in using OTEC. 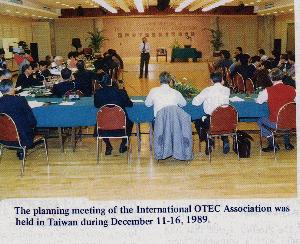 It is in the context of above considerations that the first planning meeting for the establishment of such an association was held from December 11-16 1989 in Taiwan, R.O.C., the east coast of which is internationally recognized as one of the most promising areas for OTEC development.

More than 50 professionals on OTEC and its related activities from Finland, France, French Polynesia, Italy, Japan, the Netherlands, Sweden, the United Kingdom, the United States of America and Taiwan, R.O.C. attended the meeting. Dr. C. Y. Li from the host country and Mr. Michel Gauthier of France served as co-chairmen of the meeting, with Dr. Don Walsh of the United States acting as the Rapporteur.

In discussing the objectives of IOA, it was pointed out that while the energy production aspect is important, it would be a serious mistake not to also consider the multiproducts that can be produced by the system using the "cold resources of the ocean".

The objectives of the IOA, as agreed upon by all participants, are: "The purpose of the International OTEC Association (IOA) is to provide a means for collection, coordination and dissemination of information as well as the cooperation of all interested parties in ocean thermal energy conversion and deep ocean water applications (OTEC/DOWA). The IOA is transnational, non-political and dedicated to the full utilization of the renewable and non-polluting resource of ocean thermal difference.

This is a professional organization consisting of those who are involved with, or interested in development of OTEC/DOWA technology and closely related activities. The Association invites all government agencies, companies, research organizations, academic entities and individuals concerned with this resource to participate and to discuss issues and problems of mutual interest.

Thus, the objectives of the IOA include:

The Meeting agreed that IOA should have a permanent secretariat and a work product (the newsletter).

It accepted, with appreciation, the offer of Taiwan R.O.C. to provide the secretariat* and support for the editing, production and distribution of the newsletter, **which will be the optimum "first product" of the IOA.

The meeting further stressed that IOA should develop means to ensure that full contacts was maintained between it and national organizations concerned in various countries.

Many participants cited their experience with successful newsletters and their utility in the development and maintenance of associations. The IOA newsletter would help introduce the Association to potential members and supporters as well as keep the membership informed about OTEC/DOWA developments throughout the world. It was agreed that coordinators (i.e., "reporter") for the newsletters will be as follows:

Each of the coordinators was requested to develop "subscription lists" for their geographical regions.

It was agreed by the participants that a 5-8 page newsletter would be published by the IOA quarterly. The importance of having an effective newsletter as a communication link among all those interested in OTEC/DOWA was emphasized. The success will depend upon the interest and energy put into the work by the regional coordinators.

Formation of a "Core Group"

It was noted that this present meeting was only the beginning of planning for the IOA. There was general agreement that a second planning meeting would be needed to finalize details and obtain agreement before the IOA would be formally started. A great deal of interim work would be required to maintain progress towards a successful second planning meeting. Therefore, all participants approved the formation of a "core group" committee which would continue the planning work initiated at this meeting. The Core Group would consist of:

and would be chaired by Mr. Gauthier.

All participants agreed that the result of the IOA Core Group work and the Second IOA Planning Meeting should be a fully organized and operational International OTEC Association. Further the Association should plan and conduct an international conference on OTEC/DOWA which would be held in 1991.

Time and Venue for the Next Planning Meeting

The participants' consensus was that the second planning meeting should be held no later than the end of 1990.

The sites discuss for the second planning meeting were Tahiti, Paris and Tokyo. The consensus seemed to favor Tahiti. 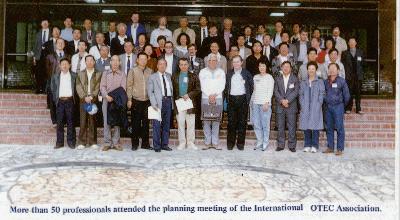 Several of the participants suggested that it was important that a charter/by-laws be developed for the IOA which would be in addition to the statement of objectives for the Association. This charter would be the fundamental organizational document for the IOA and should be done as soon as possible. Dr. Paul Yuen of the United States offered to undertake this task.

After the discussion of IOA work plan, a field trip to visit candidate sites for possible OTEC plants in the east coast of Taiwan was arranged and a development plan for the multiple product OTEC project of Taiwan was presented to the meeting for comments.