ARTIFICIAL UPWEILINGS AND THE CONTROLLED PRODUCTION OF LIVING RESOURCES

Energy from the sun¡¦s radiation, trapped in the form of heat in the Earth¡¦s tropical zone, is transported towards the poles via the oceans and the atmosphere. Both the water and air play determinant roles in maintaining the habitable climate of our ecosystem. The coldness of the deep ocean water results from.

Surface water, which transports heat towards the pole, sinking to the deep ocean after being cooled in the polar regions. The whole ocean water circulation is complex, and international programs such as the World Ocean Circulation Experiment¡¦(WOCE) aim to gather sufficient data to understand and possibly simulate the process using numerical modeling.

For several decades to a century, the deep ocean water remains below the photic zone, unaffected by the sun¡¦s radiation. Lack of exposure to the sun prevents photosynthesis from occurring but the deep waters becomes nutrient rich due to the degradation of organic matter that sinks to the deep waters from the surface layer. Values of typical nutrient concentrations are given in the table below. The nutrient content of deep ocean water (DOW) can be 10 to 100 times greater than that of surface water.

In the tropical ocean, the surface layer is warm and creates a stratification that impedes vertical mixing except when the nutrient rich DOW upwells from beneath the thermocline to the photic zone and triggers photosynthesis and primary productivity.

Upwellings are mainly wind-driven processes. When the wind blows over the surface of the ocean, friction induces a water flux in the surface layer. This flux, influenced by the Coriolis force, moves perpendicularly to the wind direction and depends on both wind stress and latitude. The flux is right hand windward in the northern hemisphere (and left hand in the southern region). This flux situation occurs in the open ocean long the equator and also in coastal zones where the winds blow parallel to the coastline. 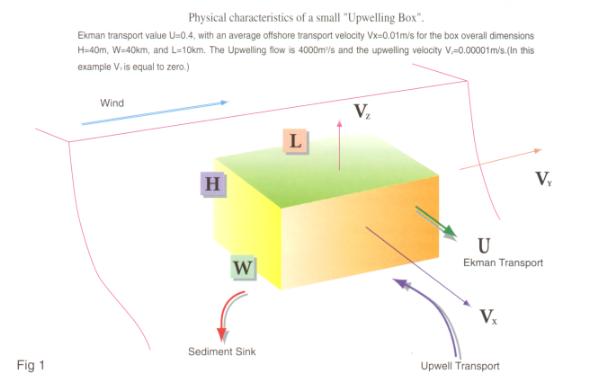 In coastal upwellings, to which this article will be restricted, the offshore transport of surface water ( i.e. the Ekman transport), is balanced by an upward transport of water from beneath the Ekman layer. When the thermocline is shallow enough, the sub-thermocline nutrient rich water upwells to the ocean surface. The most well-known coastal upwellings occur along the coast of Northwest and Southwest Africa, the coast of Peru in South America and the west coast of North America (see Figure 1). Monsoon winds also create seasonal upwellings in the Indian Ocean.

The primary productivity measured at latitude 15 of the Peruvian upwelling coastal zone is approximately 1400 gC/m2/yr. Figures are 700 and 250 for Northwest Africa and Oregon sites, respectively. Maximum new production in coastal upwelling systems can reach 2000 gC/m2/yr with a nitrate (NO3) concentration equal to 20 mmol/m3 in comparison with the average productivity of 50 gC/m2/yr measured in nutrient-poor open ocean water with NO3 concentrations less than 1 mmol/m3.

The area influenced by upwelling depends on the geography, topography, and bathymetry of the coastal zone. Because the upwelled water created a strong temperature gradient after it reaches the surface, warms up, and mover away from the coast, a good overall view of an upwelling pattern can be seen with satellite observations of sea surface temperatures. Off the coast of Peru, this gradient extends from latitude 5 to 15 degrees south. In some places, however, local eddies can create much smaller phenomena. For the purpose of this article, the main physical characteristics of a small upwelling are shown in Figure 1, Another characteristic of coastal upwellings is their variability. They are non-steady state and most often seasonal phenomena that can last for periods of only a few days or weeks to several months.

However, there are upwellings that are not wind driven. Drilling in the reefs of French Polynesian atolls showed that the nutrient content of interstitial water rises very rapidly with borehole depth. The nitrate concentration can reach 12 mmol/m3 at 10 to 20 meters depth while surrounding tropical waters are definitely oligotropic ( i.e. nutrient deficient). This demonstrates that the DOW can percolate through porous parts of the coral reefs to the surface, bringing nutrients from the deep ocean to the surface. The basaltic foundation of the atolls emit a heat flux that enables the interstitial water to warm up and ascent toward the top of the reef ( see Figure 2). This process is called¡© endo-upwelling ¡ª, Endo-upwelling can explain the high productivity of coral metabolism , ranging from 200 to 2000 gC/m2/yr, that is observed in atoll islands in both the Pacific and Indian oceansv.

Transport of nutrients to the photic zones via upwellings explains why 90 percent of global ocean natural production occurs in upwelling regions; relevance to fisheries is acknowledged in that some 50% of the fish catch comes from coastal areas where upwellings occurvi. Such estimates show the enormous impact of upwellings on the enhancement of primary production and on the food web processes from zooplankton to fish. This impact has legitimately led to the question of the possibility of creating artificial upwellings to increase marine living resources for human consumption. 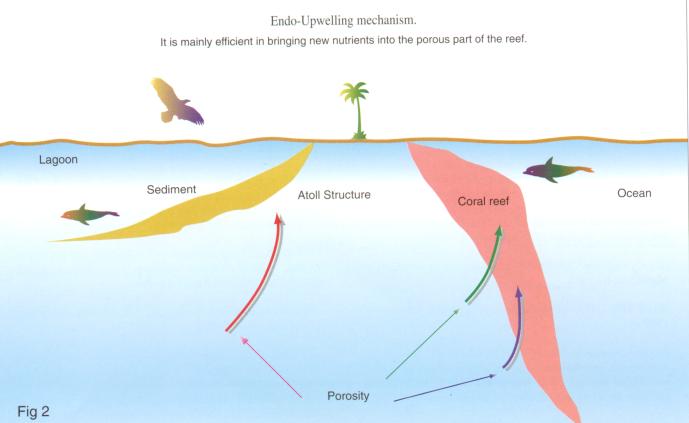 The first attempt began in the 1960s. DOW was pumped from below the thermocline to aquaculture ponds with high sun irradiationviii. From data accumulated for more than three decades, scientists learned that not only the nutrient richness of DOW was a positive parameter; DOW ¡¦s ¡§ coldness¡¨ ¡§ cleanliness¡¨ were also positive attributes. Coldness allows for easy and inexpensive control of the temperature of the ponds and the ability to provide temperature requirements of selected species at each step of growth.¡§ Cleanliness ¡¨¡X a rather vague word¡X addresses the idea that DOW is free from sea surface pollutants and pathogenic organisms which most likely jeopardise traditional aquaculture yields. Along with ¡§ coldness¡¨ and ¡§ cleanliness¡¨ , one could add a third ¡m C¡n parameter for ¡m constancy¡n. Constancy implies that the DOW eharacteristies are stable with time which is a decisive advantage in the control of the quality of the culture medium (i.e. water in the aquacuiture ponds).

A second approach to artificial upwelling results directly from the activities undertaken in the development of ocean thermal energy conversion (OTEC). Effluents from OTEC power plants contain approximately 50 percent DOW that has been used in the condenser stages. For a 400 MW commercial plant, this represents a total flow of the same order of magnitude than that of a small natural upwelling described Fig 1. Even though the DOW¡¦s initial properties may have been modified in the OTEC process, proper discharge of the nutrient rich DOW could enhance the primary production in the waters surrounding the power plant. The physics of the OTEC discharge plume has been extensively studied and the plume¡¦ s fate can likely be predicted by numerical modeling techniques if appropriate data on site characteristics is available. The biochemical impact of the processes involved are not yet properly understood viiiand the overall benefits of the OTEC discharge on fisheries are still scientifically unpredictable. Basic research on open ocean ecosystems with modeling and in situ experiments-like the Toyama Bay test ix and also with pilot size commercial plants-are still necessary to assess the full benefit of production enhancement by OTEC.

A third approach is possible to study DOW potential for living resource enhancement. This is an intermediate solution between controlled aquacuiture in ponds on land and open sea ranching. DOW will be pumped and then discharged into atoll lagoons where the water is naturally nutrient poor. With areas ranging from a few to thousands of square kilometers and water depths of a few tens of meters, these atoll islands are ideal natural enclosures for sea farming and sea ranching with proper nutrient supplies. Alternate solutions are to pump the DOW directly from beneath the thermocline x or from boreholes drilled into the coral reef (see vi ). Both solutions are technically feasible and each offers advantages and drawbacks. Both present a high risk of dramatic impact on the natural environment of the atoll lagoons and can generate criticism and objections from environmental organizations.

To minimise concerns and unforeseen ecological consequences, a suggestion would be to conduct experiments on atolls formerly used for military tests. Using an abandoned military testing range would offer several advantages. Existing infrastructure such as roads, barracks, harbour, and aircraft landing grounds can be adapted at low cost for use by research teams. Secondly, the experiments could possibly restore the ecology, damaged by previous military usage, to a level of biological production far exceeding that of the original environment. Use of these test sites by the international research community would be a unique opportunity to revitalize damaged ecosystems using current and future technologies.

Legend for Fig 2: Endo-upwelling mechanism. It is mainly efficient in bringing new nutrients into the porous part of the reef.