Ocean Thermal Energy Conversion is one of the promising renewable energy options, particularly for countries close to the equator and having a long coastline, like India. Feasibility studies are currently underway at the National Institute of Ocean Technology, for the establishment of a 1 MW floating closed cycle OTEC plant. This paper reports the results of the thermodynamic cycle analysis carried out as a part of the feasibility studies for this plant. The analysis has been done for an ammonia based closed cycle OTEC plant. Environmental data (like temperature) used in the present study are based on previously measured experimental values. A parametric study has been done to study the effect of various variables like depth of cold water intake, on the performance of the plant.

Between approximately 15o N and 15o S latitudes, the heat absorbed from the sun warms the surface sea water to a temperature near 28 ¢J. The fluctuation in the annual average temperature is only ±1 ¢J. Beneath this layer, water becomes colder with increasing depth, and at a depth of 1000 m, a temperature of about 4 ¢J is reached. Ocean thermal energy conversion (OTEC) process essentially uses this £G T to operate a heat engine, which produces electric power.

The concept of OTEC was first proposed by the French engineer Arsene d¡¦Arsonval in 1881. In 1930, George Claude designed and field tested an experimental system in Matanzas Bay, Cuba. This model generated 22 kW of power. However, the power consumed was more than the power generated. When the Gulf oil crisis of 1973 prompted an international search for alternate sources of energy, the potential for OTEC was re-examined. In 1979, a closed cycle Mini-OTEC plant in Hawaii produced net power for the first time, producing 18 kW (net). Heat exchangers for a 1 MW OTEC plant were successfully tested again in Hawaii in 1980. Since 1992, an open cycle OTEC plant generating 220 kW of power and producing potable water is operational at Keahole point, Hawaii. Research and development in OTEC technology has been witnessed sporadically in several other countries like France, Japan, Taiwan and Indonesia. The high cost of capital equipment required for OTEC, plagued by the absence of operational data from a full fledged pilot plant, have been the major deterrents hampering the commercialization of OTEC technology.

An excellent introduction to OTEC is provided by Takahashi and Trenka [1] and the current status of OTEC technology including finer details of various sub-systems has been dealt with extensively by Avery and Wu [2]. The current status of OTEC technology in the world and plans for the future are discussed in [3]. With major advances having taken place in heat exchanger technology as well as in offshore technology in the recent past, there is an increasing realization that OTEC may become commercially viable in the decades to come. This has led to a rejuvenated interest in OTEC in countries like USA and also in India. OTEC activity in India started off in the early eighties with the OTEC cell of IIT, Madras, preparing a preliminary report for a 1 MW plant off Andaman [5] and this was followed by other reports recommending different design options for sites in Lakshadweep and Andamans. However since 1987, there has been very limited activity on OTEC in India.

However, it needs to be emphasized that the potential for OTEC in India is very high. Ravindran and Kumar [3] in a recent study have estimated the OTEC potential in India to be about 180,000 MW. With such a high potential a critical look into the state of the art in OTEC technology with a view to establish a pilot plant would go a long way in giving India a wealth of experience as well as enormous operational data. This would be of much use in evaluating the commercial viability of establishing large size OTEC plants with a rating of 50-100 MW.

The above mentioned reasons coupled with the recent success of OTEC experiments in Hawaii have prompted India to take a fresh look again at OTEC technology. The Department of Ocean Development, Government of India has engaged its technical arm- The National Institute of Ocean Technology (NIOT), Madras to prepare a feasibility report for the establishment of a 1 MW OTEC plant off the Indian coast. This is expected to be followed by detailed engineering and later by the actual construction of the plant. The feasibility study currently underway at NIOT, involves conceptual design of the power conversion system, heat exchange equipment, sea water systems and structural design of the platform and the various pipes. This paper reports the results of the thermodynamic cycle analysis, which is crucial in establishing the sensitivity of the output of the power plant to various parameters besides being a major input to the actual design of all the equipment.

Shown in figure 1 is a schematic sketch of a closed cycle OTEC plant. Warm sea water is used to vaporize ammonia and this drives a turbine. The exhaust of the turbine is condensed by the cold sea water and the liquid ammonia is pumped back to the evaporator. The operating pressures of this organic Rankine cycle are in the range of 6-9 bar and the poerating temperature range is 6-29 ¢J. Ammonia is preferred because of its superior transport properties and also because of its easy availability and low cost [2]. The problem under question actually involves the following:

A thermodynamic analysis of a 1 MW closed cycle (ammonia based) OTEC plant was carried out. Measured values of sea water temperatures as a function of depth was used for the analysis. A realistic estimation of the pertinent losses in the system was done and the design parameters for a power of 1 MW for a depth of 1000 m were established. The sensitivity of these parameters to changing depth of cold water intake was studied in detail. Net power was found to vary quadratically (exponent of 2.04) with depth. 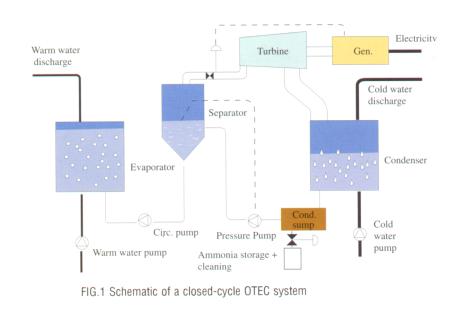 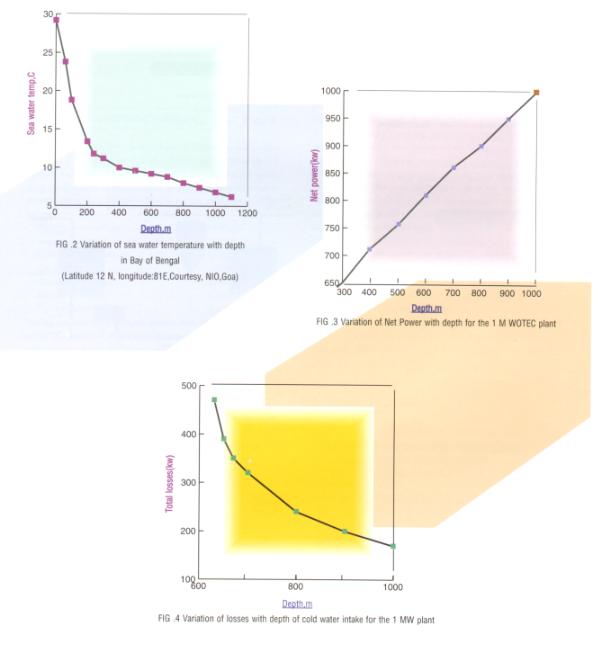 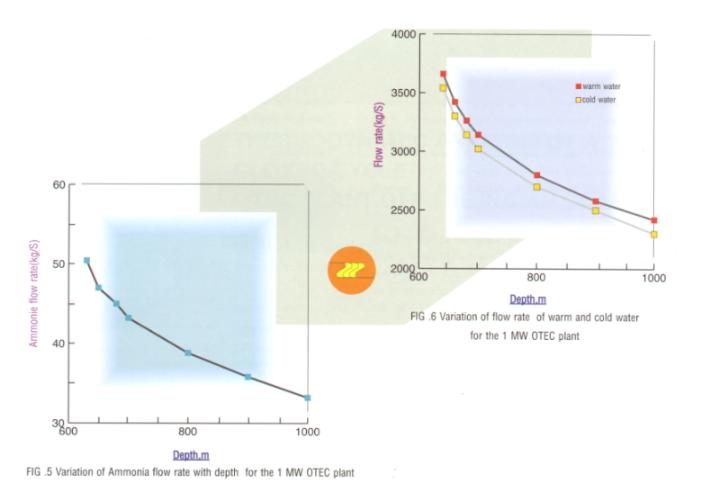