A STATE-SPONSORED AQUACULTURE AND RESEARCH PARK (I)

Established in 1974, NELHA remains the only place in the world where cold deep seawater is pumped ashore in large volumes for research and commercial projects. The State of Hawaii operates the facility, which began as a research laboratory and is now primarily an incubator of new businesses that hold promise for expanding the State's economic base. State personnel arrange and oversee land leases, maintain and operate extensive seawater supply and disposal Systems, obtain and maintain environmental and land use permits, perform extensive environmental monitoring, and conduct educational and facility awareness outreach programs.

The 1974 Hawaii State Legislature set aside 322 acres at Keahole Point, the westernmost point on the Big Island of Hawaii, establishing the Natural Energy Laboratory of Hawaii (NELH) for research into alternate energy sources and related technologies. By 1984, research activities utilizing the cold deep seawater pumped up for ocean thermal energy conversion (OTEC) investigations appeared so promising [1],[2] that the legislature established the Hawaii Ocean Science and Technology (HOST) Park on an adjoining 547 acres. In 1990, following completion of initial HOST Park infrastructure construction, the legislature combined NELH and the HOST Park into a new State agency, the 870-acre Natural Energy Laboratory of Hawaii Authority (NELHA).

The authorizing legislation, Sec. 227D of the Hawaii Revised Statutes, establishes a governing Board of nine members to oversee the activities of NELHA, which is administered through the State's Department of Business, Economic Development and Tourism (DBEDT). The Act also gives the Authority broad powers for raising and spending money, including the ability to issue bonds and other financial instruments, and exemption from the State's normal procurement requirements.

Figure 1 shows the location of NELHA. Figures 2 and 3 present maps of the land areas that NELHA controls under lease from the State's Department of Land and Natural Resources (DLNR). Major features include: 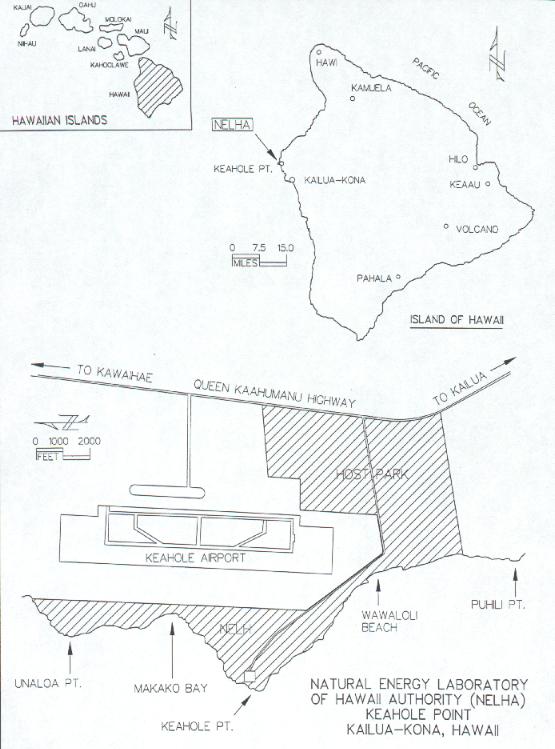 1) The 5-acre "Research Compound" is located at the end of Keahole Point. This area includes the administrative and laboratory buildings of the Authority as well as high-value space for a number of small-scale, relatively short-term, research projects.

3) The remaining NELH coastal property west of the airport boundary is subleased as undeveloped land for preparation and use by commercial tenants. This land is zoned urban, with a minimum lot size of 1 acre.

4) The HOST Park area lies north and south of the portion of the access road perpendicular to the ocean (Figure 3). Some 450 acres are available for sublease in parcels of 3 acres or more. This land is also zoned urban, with the exception of a conservation-zoned 83-acre parcel in the southwest corner. NELHA maintains a Conservation District Use Permit that allows use of this latter parcel for aquaculture and other activities. 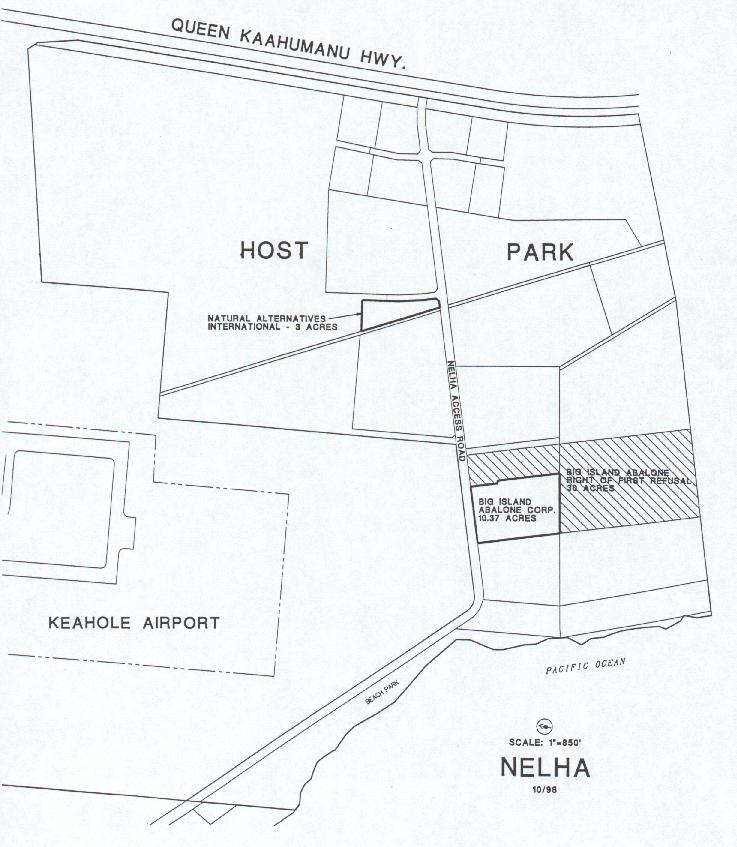 Present systems use variable speed pump drives to provide seawater throughout the coastal region at pressures up to about 16 psi (110 KPa). A booster pump station to be dedicated in November 1998 will provide the higher pressures needed to pump up to 6500 gal/min (.41 m3/s) to tenants in the HOST Park area at elevations up to 21 m (70 ft). This will allow expansion into the HOST Park area prior to completion of the HOST Park seawater supply system. An interim surface seawater system to be installed in 1999 will provide moderate flows of surface seawater to the same areas served by the deep seawater booster pumps. NELHA sells seawater to tenants at rates which cover the costs of electricity and system maintenance.

1 No longer in service.

The NELHA staff of 20 State employees manages and maintains the facilities, roads and beach park. They also maintain and operate the seawater supply and disposal systems throughout the facility. The staff negotiates and oversees tenant rental agreements, following guidance from the NELHA Board of Directors, and coordinates tenant interactions with that Board. They also interact with County, State and Federal agencies and legislative bodies, and negotiate and execute contracts for facility maintenance, security and capital improvements. In addition, NELHA operates an Analytical Laboratory that performs the sampling and analyses required by NELHA's Comprehensive Environmental Monitoring Program. The staff also performs outreach functions, both educating the public about NELHA activities and informing potential tenants about NELHA capabilities.

NELHA has obtained a number of Federal, State and County permits that significantly reduce the complexity of permitting tenant projects. Those currently active include:

At least ten Environmental Impact Statements and Assessments, totalling more than 1700 pages, have been developed during the process of obtaining and maintaining these permits.

The groundwater under the NELHA facilities is too brackish to drink and is downslope from the island's potable water supplies. All of the NELHA facility is, therefore, below the Underwater Injection Control (UIC) line, and is thus exempt from regulations that limit injection into the groundwater. The ocean waters offshore of NELHA are, however, classified "AA", meaning that they are to be maintained in a pristine state, unmodified by human activity. It is illegal, therefore, to discharge deep seawater or seawater from aquaculture operations into the ocean off NELHA, because the nutrients in the deep water and the biological waste in the aquacultural discharges would cause changes in the nearshore environment.

Faced with this situation, the authors of the 1987 Final Supplemental EIS entitled "Alternate Methods of Seawater Return Flow Disposal" [6] determined that seawater from NELHA operations should either be returned offshore beyond the 100 fathom boundary of the Class AA waters or to onshore trenches from which it will percolate back to the ocean. The cost of an outfall pipeline to deliver the water offshore is prohibitive and appears to have no significant environmental advantage over disposal into appropriate trenches excavated onshore. NELHA has constructed two segments of trench for discharge from aquaculture projects along the access road, and an additional separate larger trench for discharge from the large OC OTEC plant, which is by far the largest single water user at NELHA.

Discharges into these trenches have local effects on the groundwater, but that is not viewed as a problem, since there are no significant uses for that groundwater. Monitoring of the groundwater, however provides an excellent opportunity for advanced detection of potential significant impacts on the nearshore ocean waters, the purity of which is essential for the continued success of NELHA. For that reason, a total of 26 groundwater monitoring wells have been installed around NELHA. These are generally installed in groups of three, sampling at nominal depths of 15, 25 and 50 ft. They are located onshore from designated offshore monitoring sites and around the disposal trenches to provide samplings of various "envelopes" extending from mauka of the facility to the offshore water. The ongoing monthly sampling of these wells provides our best indication of potential problems in the ocean waters.

The monitoring program has succeeded admirably in its goal of protecting the nearshore environment. Detection of high nutrient levels in the wells near Cyanotech's operations has led to remediation and removal of the problems long before they could have any impact on the ocean. It is fortuitous that, by detecting leaks of valuable media, the monitoring also benefits Cyanotech financially.

The groundwater monitoring is only one component of NELHA's comprehensive Environmental Monitoring Program (CEMP). This program, proposed in the Seawater Return FSEIS discussed above and mandated in the approval of NELHA's Special Management Area (SMA) Use Permit from the County of Hawaii Planning Commission and in Conservation District Use Permits from the State Board of Land and Natural Resources, conducts periodic sampling and analyses of nearshore and onshore waters around NELHA.

The CEMP samples and analyzes incoming surface and 600 m water streams weekly. We measure NO3, PO4, SiO3, and NH3, as well as Temperature, Salinity, pH, alkalinity, Dissolved Oxygen, Total Dissolved Nitrogen and Phosphorus, Total Organic Carbon, and Total Suspended Solids. We also analyze samples from quarterly offshore and coastal transects for the same variables and we analyze monthly samples of the brackish groundwater from wells and coastal anchialine ponds for those variables and for fecal coliform and enterococci. The sampling and analytical work is performed by the NELHA Water Monitoring Laboratory staff of two full-time chemists and a microbiologist.

An additional component of the CEMP, which NELHA contracts out to qualified marine scientists, monitors the biota, both offshore and in the unique onshore anchialine ponds. This work is divided into three components, providing semi-annual reports on the nearshore fish populations, the benthic biota and the anchialine pond biota.

The complete CEMP has been operating since 1989, following initial monitoring of the incoming water streams that began in 1982.

NELHA has sponsored a number of studies of the archaeology of the Keahole Point region. Combining the results of these studies and surveys, NELHA is currently completing its Archaeological Preservation Plan for the area.

A Shoreline Management Plan has been prepared and accepted by the County of Hawaii. It designates a 125-ft setback zone from the shoreline for all commercial activities. This area is open to the public and included without rent in the tenant lease.

NELHA maintains three types of rental agreements with its tenants:

Following execution by NELHA and the tenant, each of these agreements must be approved by the Board of Land and Natural Resources, the Department of Transportation and the Attorney General's Office of the State of Hawaii.

The NELHA fee structure is designed to encourage the development of new businesses while collecting sufficient facility revenues to cover all costs of operations. It is planned that future revenues will cover capital improvement and maintenance costs as well. The basic structure, as summarized in Table II, establishes relatively high rates for Research Compound space and low, very competitive base rates of $100/ac/mo for unimproved commercial land. Levelled land outside the Research Compound, mostly in the "Farm Compound", has a moderate base rent of $400/ac/mo. The lease rent for commercial projects is specified as the greater of the above noted "base rent" or 2% of the gross revenues derived from the use of the land. This allows NELHA to maintain the low rent necessary to allow small businesses to start up and also to share in the success as these companies grow.

Recognizing that the $60,000 - $90,000 cost per acre of preparing raw basalt will be prohibitive for struggling start-up tenants, for the first five years NELHA provides offsets against percentage rent for capital improvements that the tenant makes to the property. 100% of the money spent on land improvements and 35% of the expenditures for above-ground improvements can be offset, but only against the 2% rent. In other words, all tenants pay the base rent.

All land use, operations and office equipment and support services, or laboratory services must be arranged through written agreements with NELHA. Special conditions and instructions may be included for certain items. Refer to NELHA Staff as indicated. Rates subject to change.

*for commercial tenants, base rent or 2% of gross revenues, whichever is greater

**for commercial tenants, base rent or 2% of gross revenues, whichever is greater, with a five year offset of lease or rent payments for fixed capital improvements made by tenant.

*These services are only available on a limited basis depending on current staff work- load.

*An additional 10% overhead cost is charged for all water use