A little of OTEC history

The history of OTEC research and development shows two relatively intense periods of activities. The first period started in 1928 at Ougree with the first Georges Claude experimental demonstration of the OTEC's ability to produce electricity and ended in 1958 with the French government's decision to abandon the OTEC projects planned for the Ivory Coast and Guadeloupe. The second period started in the 1970s with activity driven by the threat of an oil embargo. The main "players” of that second period, that is still on-going, were the USA and Japan. Comparison of the results obtained at the end of the first period to those presented today concerning OTEC economics shows, curiously, at least one similarity--they both addressed the potential for small OTEC plants to be profitable at market prices that exist in some isolated tropical regions where both electricity and fresh water are expensive. 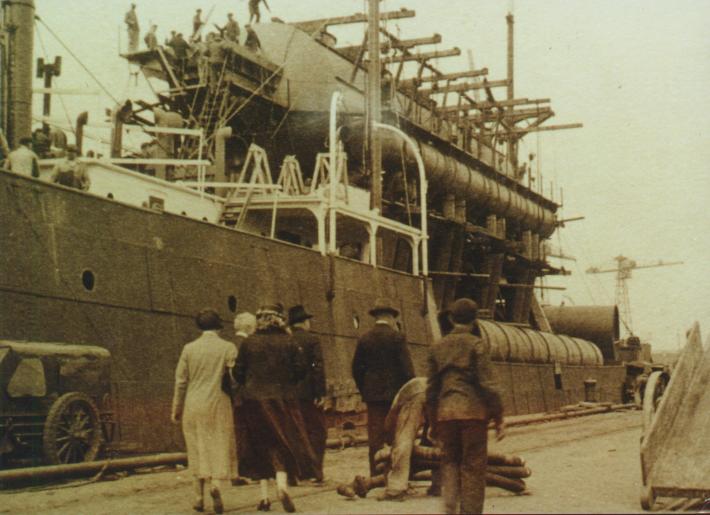 Notes: Most of this article was extrated from the keynote speech "What Future for the OTEC/DOWA" given at the IOA'99 International Conference, Saga/Imari, Japan. For readers who are not yet familiar with the Euro, the new European currency, an approximative conversion factor of 1 Euro equal to 1 US dollar can be used for the purpose of simplification without jeopardizing understanding of this article.

D'Arsonval (1881) is entitled to recognition as the father of the OTEC principle and Campbell published papers describing closed-cycle OTEC before WW I but there is no doubt that G. Claude's activities between 1928 and 1935 have been definitely the most important for modern development of OTEC.

G. Claude was born in 1870. His father, originally an elementary school teacher, shifted to industry and reached a confortable situation. He personally took charge of his son's education untill Georges entered the Ecole de Physique et de Chimie de Paris. After being graduated G. Claude, started his career in electrical engineering during a period where electricity and gas were competing for public and house lightning and he was involved early-on with electricity and gas production processes. He worked for the conditioning of acetylene gas for both lightning and soldering, and then in R&D to separate oxygen/nitrogen and other natural gases from air. He worked on air liquefaction and was on the Board of "L'air Liquide"  when the company was established in 1902.

He was an expert in high pressure gas processes and in 1917 developed a process for the synthetic production of ammonia. Financial gains from his patents' royalties made him a wealthy businessman. In the 1920s he became interested in the extraction of gold from sea water and later in the development of OTEC. He was obviously a great engineer and also an entrepreneur interested in the commercial potential of his inventions. He certainly had a great "ego" and took considerable political and financial risks to develop his ideas. He invested a great share of his personal fortune in OTEC. It has been estimated Claude spent the equivalent of US $10 million of his own money for the Ougree, Cuba and "la Tunisie" enterprises. The costs for the "la Tunisie" experiment itself totaled 9 million Francs (1935), approximatelly 6 million Euro, 61% and 28% for the energy plant and the ice plant respectively. G. Claude died in 1960 . [1]

Before G.Claude's experiment, the main technical objection to OTEC was that the warming of the deep ocean water (DOW) during its journey through the Cold Water Pipe (CWP) would reduce the temperature difference between the DOW and the sea surface water such that the parasitic power needed for the pumping of sea water and the circulation of working fluid (plus the degassing for Open Cycle) would be greater than the gross power produced by the plant. In other words, G. Claude's detractors claimed the power balance for OTEC plants would be negative.

To demonstrate the validity of the OTEC open cycle concept G.Claude used a two- step strategy. First, he used river fresh water to demonstrate that with only a 20 ¢XC difference in temperature the power balance of the process was positive. At Ougree on the Meuse river, his installation delivered a gross power of 59.4 kw and required only 11 kW for pumping and degassing. Then in 1929/1930, at Matanzaza (100 km East of La Havane in Cuba), Claude replicated the Ougree experiment using an over-sized deep water pipe (2m in diameter) to demonstrate that: a) installation at sea was feasible, 2) energy for pumping the deep sea water agreed with his estimation, and 3) use of "boiling" sea water did not generate foaming or problems in the vacum evaporator.

After Ougree and Cuba, it was demonstrated that an on shore electric Open-Cycle OTEC plant with a 2000 meter CWP was technically feasible - at least up to a capacity of a few MW compatible with the 2 meter diameter CWP Claude used in Cuba's experiement.

After Cuba one had to wait more than 40 years for experimental demonstration of the feasibilty of a floating Close Cycle OTEC with mini-OTEC, operated offshore of Hawaii in 1979. Almost at the same time, a Japanese experiment confirmed the feasibility of onshore OTEC using a different arrangement, components and materials (Nauru, 1982).

From his experimental work in Cuba, Claude concluded that with a temperature differential of 24¢XC, a steady DOW flow of 1m3/s could contribute to a generation capacity of more than 500 kWe net. He thought that large floating OTEC plants could be built at the investment cost of 2000 F/kW (1930), i.e. a little less than 1 Euro/W present value [2] and that OTEC electricity could compete with fossil fuel and hydro electricity that was rapidly developing at that time.

Claude also thought that before commercial offshore plants it was necessary to first test an onshore OTEC plant of few MW capacity. Unfortunately the world was suffering from a financial crisis and Claude could not foster the necessary funds and was "kept from realising the industrial enterprise he had wished".[3]. But Claude got over his disappointment and decided to by-pass that experimental intermediate stage and go directly offshore and commercial. The story of this venture and the failure of the G. Claude's floating ice plant "la Tunisie" (1933 -35) is well known.[4].

To close the chapter on OTEC economics for that first period, one should recall the results of two further attempts to build onshore OTEC electricity-generating plants in the French colonies. One project was proposed in1939 with the purpose of building 2 Open Cycle plants of 3.5 MWe each in Abidjan, a French colony of the Ivory Coast. A low level of theoritical studies was maintained during WWII but most of the efforts were accomplished after 1945. Most spectacular experiments occured between 1953 and 1955 with the test of 2 meter diameter CWP offshore from Abidjan. The other project started in 1958 using results of the Abidjan studies. The goal was to build a 3.5 MWe plant in Guadeloupe.

Economics of the Abidjan project

The final report of the Open Cycle OTEC plant for Abidjan presented the following estimates (see Table 1). The global investment cost for a first 3.5 MW unit with its own CWP was estimated at 2604 million francs (1957) i.e. 43 million Euro (1996).

The main cost of 18 million Euro (42% of total investment) was for the construction and installation of the CWP which was 4.9 km long and 2.5 m in diameter. About 6.5 million Euro was for equipment like barges and cranes that could be reused for the intallation of CWPs for later OTEC plants. These costs represented an approximate investment of 12 Euro/We for electricity.

Economics of the Guadeloupe project

The technical features of this onshore 3.5 Mwe OTEC were very similar to the Abidjan project except for the CWP being 4.2 km long and 1.95 m in diameter, and use of a surface condenser for fresh water production. The global investment cost resulting from a request for proposals was 5075 MF (1959) i.e. about 70 million Euro present value (and a specific cost of 20 Euro/W for OTEC compared to 2.5 Euro/W for a traditional thermal plant). The average daily fresh water production was 5000 m3. . The economic study included different hypothesis on CWP life time (10, 15 or 30 years) and interest rates ( zero, 4 and 8%). Three sale prices were considered for fresh water, starting at 0.57 Euro/m3, to 1.16 and 1.74 Euro/m3. The highest price (120 F/m3 ,1958 or 1.74 Euro/m3) was that of water obtained from traditional desalination plants at the end of the 1950 and the lowest (0.57 Euro/m3 ) was an estimated limit for the long term. Detailed results are given Table 2.

The Guadeloupe OTEC study showed that assuming a loan rate equal to 8%, a cold water pipe life time of 30 years and a reference price of 0.11 Euro/kWh for fuel electricity, the sale price of fresh water as a by-product had to be equal or greater than 2.62 Euro/m3 to render the OTEC plant competitive. With lower loan rate of 4%, competitivity was obtained with prices of 0.1 Euro/kWh and 1.54 Euro/m3.

But for both the Abidjan & Guadeloupe projects, the studies concluded OTEC was not economical because there was no market for desalinated water at those prices in the two French colonies. The Abidjan and Guadaloupe OTEC projects were abandonned in 1958 and 1959, respectively, for economic reasons.

Political reasons may also have influenced the decision. In 1958, with the return of General de Gaulle as the head of French government and the beginning of the "deolonisation" process, there no longer was political interest in risky investments in overseas territories.

Aknowledgement: I am grateful to Jean-Marc Meurville, Professor at the Ecole Nationale d'lngenieurs Arts et Metiers de Paris, for his contribution to this article.