The Natural Energy Laboratory of Hawaii Authority, an agency of the State of Hawaii, has successfully completed deployment of its new 55-in diameter high density polyethylene (HDPE) deep seawater pipeline that extends to a depth of 3,000 feet, 9,700 feet offshore of NELHA's Hawaii Ocean Science and Technology (HOST) Park. The pipeline, designed for NELHA by Makai Ocean Engineering Inc. of Waimanalo, HI, will supply up to 27,000 gallons per minute of cold (39¢FXF), clean and nutrient rich deep seawater to commercial tenants in the 547-acre HOST Park area of NELHA, just South of Keahole Point, the western tip of Hawaii Island. This new pipeline will enable existing and new NELHA tenants to pursue research and commercial efforts toward utilization of deep ocean water, thus continuing NELHA's mission to expand and diversity Hawaii's economic base.

NELHA's prime contractor, Healy Tibbitts Builders, Inc. (HTBI), assembled the pipeline at Kawaihae Harbor, about 27 miles North of Keahole Point. The 60-ft long, 55-in OD pipe pieces from supplier KWH Pipe in California, arrived by barge in June and July 2001. The pieces were joined by heat fusion into 1,000-ft long sections, which were pressure tested and initially stored on shore. In September, concrete anchor weights were fastened to the pipe as the sections were pulled into the water. Blind flanges on the ends kept each section full of air so that the sections, with the anchors attached, floated on the surface of the harbor.

Following a one-week delay due to shipping problems resulting from the events of 11 September, HTBI began flanging together the pipe sections on Friday, October 5, 2001. The pipeline was towed out the harbor entrance as each successive section was connected, eventually stretching nearly two miles into the ocean. Several tugs and barges towed the assembled pipeline from Kawaihae Harbor to Keahole Point, arriving about dawn on Sunday, October 7th.

The pipeline was positioned along its intended offshore path. Four large bulldozers on shore held the nearshore end in position while the offshore end was pulled into the proper position by two tugboats. Cables fastened to a large pre-installed anchor established a required curve in the pipeline route. Pumps on a barge at the nearshore end began flooding the pipeline at 4,000 gallons per minute shortly before midnight on Sunday. Venting air through valves on the offshore blind flange controlled the pipeline air pressure. The tugs offshore provided a pull of more than 60 tons, as required to keep the pipe from buckling under the stresses of the sinking process. At shortly after midnight on October 8th, one of the two 4-1/4-in diameter nylon hawsers attaching the offshore end of the pipe to the pulling barge broke. Though no one was injured, the breaking of the line made it impossible to continue with the deployment. Large compressors on the barge pumped air back into the pipeline, forcing out the water and re-floating the nearshore pipeline and anchors.

The pipeline remained in position on the surface until two new 270-ft long hawsers could be fabricated and flown in from Houston. The new hawsers arrived in Kona on Wednesday afternoon, October 10th and were installed for the final deployment, which went very smoothly on Thursday evening, October 11th. Once the pipeline was full of water, with the offshore end hanging about 90 ft below the offshore barge, divers were scheduled to remove the blind flange so that water could be pumped through the pipeline. Unfortunately, strong currents at that time made it impossible for divers to work, so the pipeline had to be lowered to the bottom with the blind flange still attached. The offshore pipeline intake reached its final position at 3,000 ft depth shortly after noon on October 12th.

Over the next three days, a remotely operated vehicle (ROV) removed all of the 22 nuts and all but three of the bolts around the blind flange, but the remaining bolts hung up on the polyethylene pipe. Efforts to "blow off" the 1-1/2 ton blind flange by pumping water through the pipeline were unsuccessful, so on the evening of October 15th, the ROV picked up a shackle lowered from another vessel and attached it to the flange. After the ROV retired to a safe distance, the flange was pulled free, leaving a successfully deployed pipeline on the bottom.

Subcontractor John E. Chance and Associates of Houston installed a series of acoustic transponders on the sea floor and Differential Global Positioning System (DGPS) transponders on all vessels to develop a navigation grid that provided highly accurate three-dimensional positioning throughout the deployment area. "DRONETM" displays, showing real-time locations of all vessels to within a few feet, were located in key positions on all major vessels and onshore.

Subcontractor, Underwater Technology Services, Inc. provided a Phoenix "Remora 6000" remotely operated vehicle (ROV) with 20,000-ft depth capability. In addition to a complete post-deployment survey showing the whole length of the deployed pipeline, this vessel provided, for the first time, real-time pictures of the weights touching down as the pipeline sank to the bottom. It was also used for removal of the 1.5-ton blind flange on the offshore intake at 3000-ft depth.

Now that the offshore deep seawater intake is successfully installed, the pipeline and a companion surface seawater intake structure are being connected to shore crossing tunnels installed several years ago. HTBI will then construct the onshore pump station, containing three 250-hp pumps each for the surface and deep seawater. A follow-on contract will install the onshore distribution pipes and booster pumps that are scheduled to deliver the seawater to HOST Park tenants beginning in July 2002. 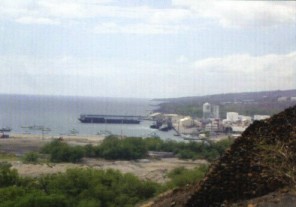 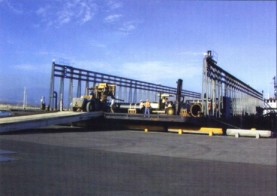 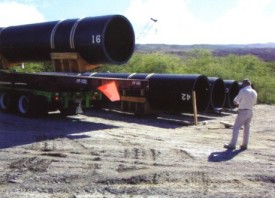 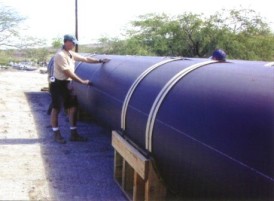 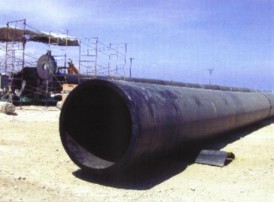 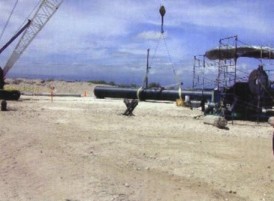 A completed 1000-ft. Pipe segment lies next       A new 60-ft section is moved to the fusing machine.
to the fusion machine(left) which is fusing a
second segment . 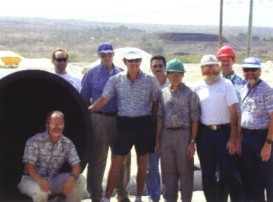 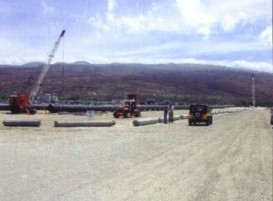 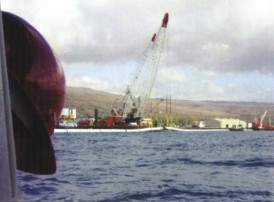 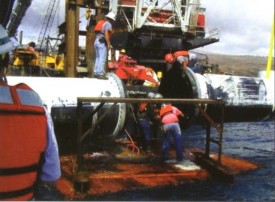 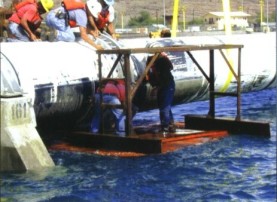 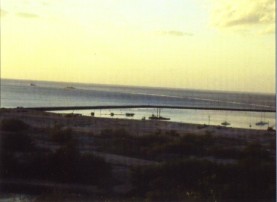 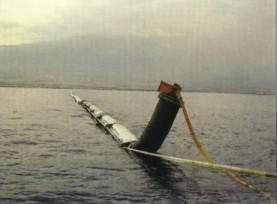 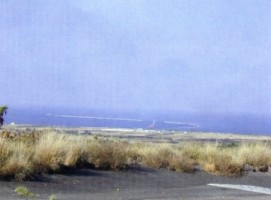