WITH EXHAUST OF NON-CONDENSABLE GAS

In Open-cycle Ocean Thermal Energy Conversion (OC-OTEC) system, the net output power is the difference between the gross power output and the internal power consumption of the system. The main internal power consuming devices of the OC-OTEC system are the intake pumps for the cold deep sea water and the warm surface sea water, and the vacuum pumps or compressor for exhausting non condensable gases from the system. Therefore, the reduction of the internal pumping power of the system is important for the increase of the net power output of the system.

A typical barometric type OC-OTEC system is shown in Figure1. In open cycle system warm sea water from the surface of the ocean is flash evaporated in evaporator to produce steam. The surface sea water normally contain dissolved gases which are released during the flash evaporation process. The generated steam is then used to drive a turbine coupled to a electrical generator. The steam is then condensed using cold sea water drawn from ocean depth. The released dissolved gases (also called non condensable gases) have to be continuously removed form the condenser using an exhaust pump.

Increasing efficiency is important in the production of electric power from low energy density natural resources such as ocean thermal energy. One way of increasing the energy efficiency of the OC-OTEC system is to reduce it's internal power consumption. 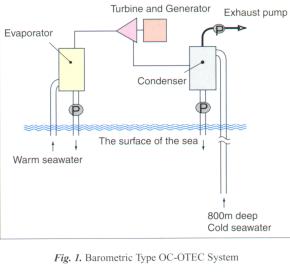 Figure 2 shows the experimental setup used. The main components of the experimental equipment are evaporator, condenser, warm and cold water pumps, vacuum pump and the water storage tanks. As shown in this figure, a turbine-generator is not installed. An expansion valve is used as the substitute of a turbine. 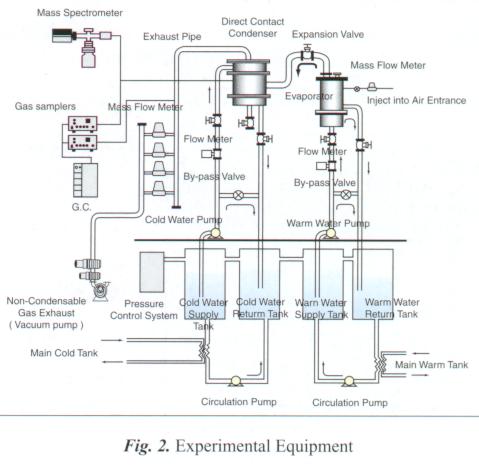 Table 1 gives the specifications of the main components mentioned above. The experimental setup is operated in closed cycle using fresh water. Since the experiments are carried out under vacuum condition, any dissolved gas in the water would have to come out of solution and thus the circulating water contains no dissolved gas. Therefore in order to simulate the effect of non-condensable gases in the condenser, air has to injected into the evaporator at different flow rates. The air injection flow rate was variable between 0 and 0.5 liters/min. The exhaust gas flow rate was measured with four mass flow meter as shown in Figure 2.

Figure 3 shows the configuration of the spout type evaporator with five nozzles (inside diameter is 30 mm). A mesh was placed around the nozzle to create finer size water droplets after spouting. 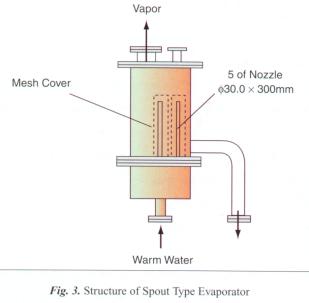 Figure 4 shows the details of the direct contact type condenser and the cold water distributor placed at the top of condenser. The distributor convert the cold stream of water into fine line droplets and evenly distribute them over entire cross section of the condenser. The distributor is made of 16mm wide channel sections spaced at a distance of 20 mm apart. On the sides of these channel sections, 5 mm wide windows are cut on which guide rods are placed as shown. As these channels fill up the cold water overflow onto guide sticks creating fine uniform droplets. 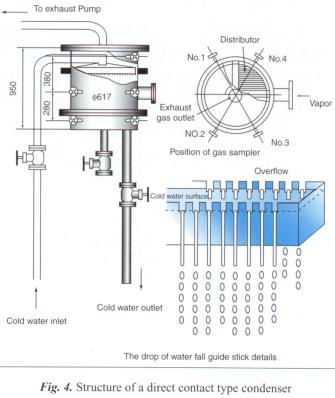 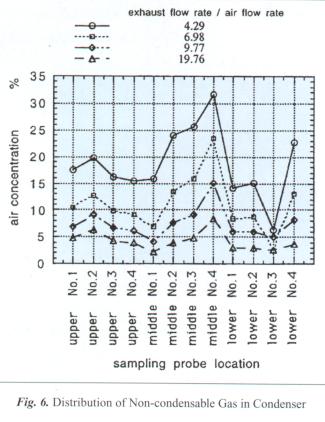 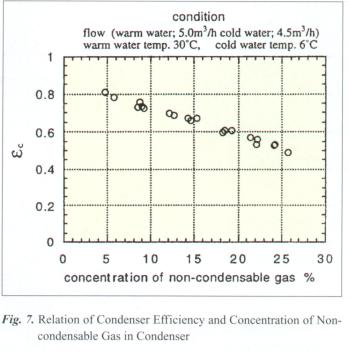 In comparison of 2 types condenser, new direct contact type condenser produced experimentally was high efficiency, because exhaust flow rate was about 1/2 to obtain performance of same. On the other hand, performance of condenser was influenced the concentration of non-condensable gas greatly. It became clear that exhaust flow rate of around 10 times of quantity of dissolved gas released was necessary to get high performance ec=0.8. The non-condensing gas concentration was less than 5%.