Continuous cultivation of a diatom

In order to establish long-term continuous culture of a planktonic diatom, experiments using Deep-sea water (DSW) as the culture medium for Chaetoceros ceratosporum OSTENFELD were carried out. DSW is nutrient-rich compared with surface sea water. We used a chemostat system for phytoplankton, Ebara Photo-bio-reactor (PBR-60, Ebara Co. Ltd.). Water temperature and pH were adjusted to 17±1¢J and 7.8±0.1, respectively. Culture medium was stirred at 50 rpm and aerated at a rate of 60L air/min. Illumination was provided by halogen lamps with a photo flux density between 90 to 120 £g E/m2S for 24 hours. In continuous culture, the turnover rate of DSW was elevated step by step from 0.2 to 1.2/day. The cell density fluctuated from 10¡Ñ104 to 61¡Ñ104cells/ml in continuous culture; high level of cell density was obtained for as long as 125 days. Since there was no difference in yield of cells between turnover rates 1.0 and 1.2/day, 1.2/day became the upper limit state. N-nitrate and P-phosphate were almost consumed at each turnover rate in continuos culture. The consumption rate of silicate was lower than nitrate and phosphate, and decreased with turnover rate. However, more than 80% of silicate was consumed. The nutrients of DSW were consumed efficiently in the continuous culture device.

In Toyama Prefecture Fisheries Research institute, 3000 tons per day of deep-sea water (DSW) have been pumped from a depth of 321m in Toyama Bay (Nakamura 1999). DSW, as compared with surface-sea water, has low temperature and biological cleanliness. The cold, clean DSW is mainly used for stock enhancement or ecological studies of cold water/deep-sea species of fish and shellfish in our Institute (Matsuzato 1998, Nakamura 1999). Another characteristic of DSW, nutrient-richness, has been also studies in microalgal culture (Matubayashi et al. 1994). Diatoms, in previous trails using DSW, were batch cultured in flasks (Nakashima 1988, 1992 a, 1992 b, Fukami 1992) by small-scale or short-term continuous culture, for several days or dozens of days (Fukami et al. 1998).

Our experiment was carried out to establish long-term continuous culture of a planktonic diatom, Ch. ceratosporum OSTENFELD, using DSW as the sole source of nutrients. This is a well-known species, which has been used as a diet for brine shrimp, bivalves, planktonic larvae of sea urchins, and rock oyster larvae (Takano 1967, Tanaka 1982, Tenjin & Ishii 1984). Yield of this diatom may support a new project in the multiple/cascade use of deep-sea water.

Chaetoceros ceratosporum OSTENFELD (Fig.1) isolated from Sagami Bay (Tanaka 1982) was kindly provided by the Japan Marine Science and Technology Center. We cultured this strain at 15 ¢J with a photo flux density of 40 E/m2S for 24
hours for this experiment. 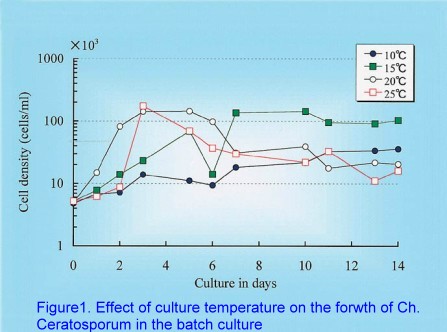